It has been over ten days since I last blogged, but it’s not because I’ve been lazy or too busy, but because I’ve had nothing to blog about!

Last week was a terrible week for me on PKR as I spiralled downward hard and fast. Now I understand that downswings go hand in hand with upswings but last thing I couldn’t catch a break as everything and anything went wrong.

I admit that I did play bad at some points, but only quite minimally compared to the run-bad that I encountered. Maybe some people can identify with this, but after running my initial $500 up to $1,380-odd I decided to trial a tracking program called PokerOfficer. My accounted plummeted to $980 before I stopped using PokerOfficer and saw my account climb to over $1,400. I then – through the advice of some friends – downloaded Holdem Manager, and like in the previous instant, my account again spiralled downhill to below $1,000.

That downswing included one session where I lost nearly six buy-ins with my EV stating I should have only lost one buy-in. The other negative sessions also saw me run well below EV . . . but that’s poker right? I have been keeping track of the major hands that I’ve lost when I’ve been all in. Aces cracked 8 times, Kings 14, Queens 3, Jacks 5 and Sets 2 with most of these being on the flop. On the flipside, I’ve cracked Aces three times with standard coolers getting there with Kings and Tens, and only cracked Kings and Queens a combined three times.

Now that I’ve had close to a week away from the virtual felt, I have a few questions to pose to you before I return to PKR. What is my next step?

Should I continue to play solely full-ring?

Should I switch to solely six-handed?

Now I completely understand that my sample size of 15,000-odd hands isn't much to go from, but I am just starting with online cash, so I definitely want to take steps in the right direction.

Your help is needed as I don’t want to see this ugly mountain continue to slide downhill! 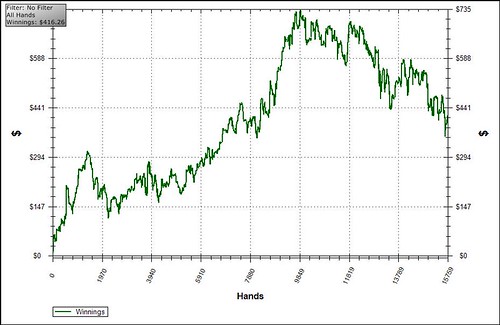 For additional blogs, interviews, articles and photos from tournaments around the world, head to Tilted Behaviour.