It had been a while since I ventured up to Melbourne, so it was good to journey up the highway to the city for some fun.

My friend Bec and I had discussed a night of ice skating a few weeks back, and with the day finally upon us, I was more than a little nervous. I arrived early planning to catch up with a mate, but when some things got in the way, we decided to postpone that and instead I ventured to the city to check out the water-damaged Crown Poker Room.

Things didn’t seem too bad in the room, and I decided to take a seat on a $2-3 NLH table to kill the time before I made my way to an icy death!

and after a few players had limped, a player with over $800 in the cutoff decided to make it $15 as he started putting his chips in a rack. Both the button and small blind called, as did I, before the limpers followed suit to see the pot sit at around $105. The flop fell down

and I led out for $45 – actually thinking the pot was smaller – and everyone folded apart from the original raiser. The turn landed the

and I toyed with checking, but with over $200 in the pot, I thought there was a slight chance that I could get a call from hands that would check behind – such as flush draw or even Jacks or something – and consequently moved all in for my last $140. My opponent deliberated for about three minutes before stating he was folding a flush draw for me as I racked in the pot to move to just under $330.

Mis-reading the size of the pot on the flop I really would have liked to bet say $65 to take the pot to $235 and then my shove would be about half pot and most likely have been called – and with no diamond landing on the river – I would have more than doubled.

A few hands later I opened

to $11 and found one caller before being raised by the small blind to $22. We both called and I folded the flop as one player flopped trips and the other turned the nut flush.

Vincent ‘Wonky’ Wan walked in the room and I decided to sweat him for a while and discuss a few hands that we had been chatting about online that we had witnessed from a DeucesCracked training video. I must have brought him a little bit of luck as he chipped up nicely before it was time to hit the ice!

I picked up my mate Alex from the CBD and we made our way to IceHouse to meet up with Bec and her mates.

We grabbed our skates and made the nervous stumble to the ice rink as kids and adults whizzed round in a circle. Nervous as all hell, me and Alex slowly stepped on the ice holding the rail tightly as we attempted to make our way round the ring.

Although I use to roller-blade quite frequently when I was younger and have been skiing all my life, I was still just a little worried of face planting on the cold and hard surface.

Eventually though it all came back to me and it felt completely natural as I whizzed around the rink like a semi-pro zigzagging in-and-out of people as the DJ blasted 80’s hits through the sound system.

Alex on the other hand was S-T-RUGGLING! He could barely do a lap without clutching to a nearby rail and randomly he would fall over forcing both a simultaneous “you allright dude?” and “bwahahahaha” from me.

Unfortunately for Alex, one of his falls saw him land a little harder than the others and he bruised up his knee pretty bad and decided to take a break. I continued to skate round the rink flirting with landing on my ass as I tried to go as fast as I could before slowing down to take corners that were tougher than I expected.

With everyone about to call it a night after several hours on the ring I made my way back onto the ice after taking a quick break. I stood on the ice, took two steps forward and fell flat on my face . . . I honestly didn’t know you could feel that embarrassed! 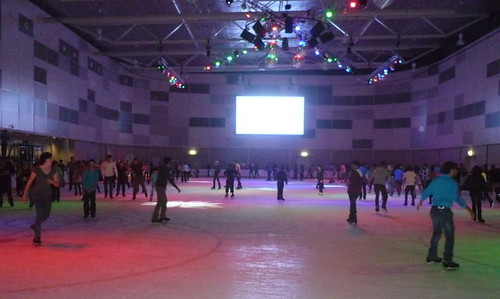 I picked my sorry ass up and did a few more laps, before exiting IceHouse with everyone before me and Alex decided to stop off at Chappelli’s for a very-late midnight dinner.

Good food, interesting discussions revolving mostly around poker and a long ride back to Geelong to be in bed by 4am.

For additional blogs, interviews, articles and photos from tournaments around the world, head to Tilted Behaviour.