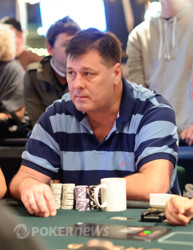 However, when all was said and done, it was Australian pro Michael Pedley who outlasted them all to capture the title for the second time in five years!

Here is how things stacked up at the beginning of the day:

The first elimination of the day came when action folded to Michael Benvenuti in the cutoff and he opened to 3,500, which Rettenmaier called from the big blind. Both players proceeded to check the

was put out on the turn. Rettenmaier was first to act and led out for 3,800, Benvenuti called, and the

Rettenmaier gave it a few moment's thought before moving all in, enough to put his opponent at risk. Benvenuti hit the tank for a solid three minutes before a clock was called. At this point, Benvenuti announced a call only to muck when Rettenmaier rolled over

for trips. Benvenuti was eliminated on the hand in tenth place.

A short time later, a short-stacked Andrew Scarfe hit the rail after his

failed to get there against the

of Krost. After that, a hand developed that changed the course of the tournament. It began when action folded to Rettenmaier on the button and raised to 4,200. Karamalikis was in the big blind and pushed back to the tune of 10,600. Rettenmaier thought for a moment and then four-bet to 22,900, and Karamalikis simply moved all in for 101,900 total. Rettenmaier looked a bit blithe and made the call, creating a pot of around 205,000!

Karamalikis was ahead and stayed there as the board ran out

After losing that pot, Rettenmaier was unable to recover. His demise came when he ran

of Krost. Rettenmaier failed to hit an ace and was dispatched in eighth place. He was followed out the door by Tony Sama, who’s

The next elimination came when Collopy raised to 6,000 under the gun and Kelly, who was next to act, three-bet to 13,300. Action folded back around to Collopy and he moved all in for a little over 50,000, which Kelly called.

Collopy was dominated and in need of a ten, and while the window card was the

, it was followed by the

on the flop. Both players had flopped a set, meaning Collopy needed to catch the case ten to survive. The

turn was not it, and neither was the

river. Collopy was eliminated on the hand in sixth place.

From there, Watson raised to 6,000 and Kelly opted to call from the big blind. The flop brought out

and Kelly lead out for 11,000. Watson gathered some chips and pushed a raise to 25,000 forward. Kelly announced he was all-in and Watson sighed as he made the call for his tournament life.

for a flopped flush and Watson threw his cards face down towards the muck. The dealer turned over his

and he was drawing dead. The

completed the board as Watson shook hands with his opponents and exited in fifth place.

of Kelly. The board ran out

and the former Aussie Millions Champ made his way across the room to take his seat in the 10th Anniversary Tournament of Champions, which had begun about an hour earlier.

The three-handed battle was intense as chips bounced back and forth between all the players. As it happened, Kelly was the next to fall when he moved all in preflop with

and was called by Pedley’s

and that was all she wrote for Kelly.

The heads-up match between Pedley and Karamalikis was fairly short, though both traded blows. Eventually Pedley managed to pull out to a decent chip lead and called Karamalikis’ all-in bet of 117,000. Pedley held

of Karamalikis crushed. The board ran out an uneventful 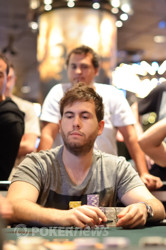 Jonathan Karamalikis moved all in preflop for around 117,000 and Michael Pedley called.

Pedley had Karamalikis dominated as the crowd leaned in to see their hometown boys duke it out. Karamalikis' rail pleaded for a ten, but the

flop did not deliver. They then turned their focus toward a chop, which would happen if a deuce hit. "Deuce," they yelled as the dealer burned and put out the

. Close but no cigar.

blanked on the river and he was eliminated in second place. Meanwhile Pedley conquered the field, capturing the Rebuy title for the second time in five years, not to mention the $122,670 first-place prize.

Both players invested 15,000 to see a flop that read

. Karamalikis bet 20,000 and Pedley made the call. The turn was the

hit and Karamalikis bet 70,000. Pedley gave it some thought and eventually put his opponent all-in. Karamalikis snap-folded his

and Pedley showed the

. Michael Pedley now has a commanding chip lead in this heads up match.

In a limped pot we saw a

and Karamalikis checked to Pedley who shoved. Karamalikis snap-folded and was left with just 210,000 chips.

board we picked up the action in the first hand of heads up play. Karamalikis bet out 18,500 and Pedley made the call from the button. The river was the

and Karamalikis bet 30,000 into Pedley who raised to 100,000. Karamalikis just called and Pedley showed

for nines full and took down the pot.

Pedley got away very cheap and has to be happy Karamalikis didn’t decide to shove on him. 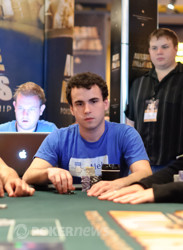 And there we have it, it’s an all Aussie heads up! Michael Pedley just raised from the button to 14,000 and after Karamalikis had folded it was Kelly who shoved all-in. Pedley asked for a count and said, “Can I phone a friend?”. Karamalikis laughed and said, “You can ask me what to do”. Kelly sat motionless the entire time and Pedley added, “This is probably a very easy decision”. The all-in was for a total of 116,500 and Pedley eventually made the call.

and brought us down to heads up play. Michael Pedley and Jonathan Karamalikis have both won Aussie Millions tournaments before and will be going for their second ring.

Huge Double Up For Pedley

In a blind battle Michael Pedley and Jonathan Karamalikis just played a massive pot. Pedley got his chips in pre flop and Karamalikis had a chance to get heads up against Dan Kelly.

and Karamalikis was in good shape. The turn, the

, gave Pedley some extra outs and on the river, the

, he hit is straight. Karamalikis sighed and shook his head as he gave up almost half his stack. Pedley is now in the lead with a big lead over the other two players.

Dan Kelly was in the small blind and raised enough to put Michael Pedley all in. The latter called from the big blind and the cards were turned up.

Pedley was behind and left wanting on the

flop. Much to the delight of his supporters on the rail, the

spiked on the turn to give him the lead. The

river didn't change a thing and Pedley doubled through Kelly.

Kelly vs. Karamalikis in 200K Pot

A big hand just occurred that saw a pot of 200K! It begna when Dan Kelly opened from the button for 6,000 and Jonathan Karamalikis three-bet to 18,000. Kelly made the call as the flop came down

. Karamalikis was first to act and led out for 22,500, which Kelly raised to 48,000. Karamalikis called and the dealer turned the

Karamalikis thought for a moment before betting 33,000, Kelly called, and then both players checked the

and Kelly sent his cards spinning to the muck.