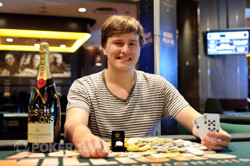 On Saturday, Event #23 $25,000 NLH—Semi Shootout began with 20 players and played down to a final table of six; however, only four of those men were slated to get paid. Given the hefty price tag, the field was filled with experienced pros, which was reflected in a final table that included Tony G, Dan Kelly, Daniel Alaei, JC Tran, Elliot Smith, and Dominykas Karmazinas, the latter beginning the day as nearly a 2-1 chip leader over his next closest opponent.

It only took one orbit into play for the first elimination to occur. It happened when Karmazinas raised to 3,200 and received calls from Smith in the cut-off, Alaei on the button, and both Tran and Tony G in the blinds. When the flop came

appeared on the turn and Karmazinas checked to Alaei, who counted out a big bet and fired 47,000 into the pot. Karmazinas didn't flinch and made the call. On the river the

hit and without hesitation Karmazinas moved all-in, putting Alaei to the test. The American pro was far from happy and he had a decent 135,000 chips left behind; nonetheless, he announced a call. Karmazinas turned over

and Alaei mucked his cards and stood up from the table. He whispered something into Tran's ear and quickly left the tournament area, bringing about the money bubble.

, he checked to Karmazinas, who bet 5,900. Smith folded and Tony G check-raised all in, and just a couple of seconds later Karmazinas made the call.

on the river, delivering the final blow to Tony G who got up from his seat, shook some hands, and left the tournament area with the unfortunate distinction of being the bubble boy.

Not long after, a short-stacked Kelly opened for 6,000 on the button only to have Karmazinas three-bet to 16,500. When action came back around to Kelly, he moved all in for around 55,000 and Karmazinas snap-called.

It was a classic flip, but Kelly needed to improve to keep his tournament hopes alive. Unfortunately for him, the board ran out an uneventful

After being chipped down to around 40,000, Tran moved all in from the button and was called by Karmazinas in the small blind. Smith then moved all in over the top for 208,900 total, and after contemplating it for about a minute, Karmazinas released his hand.

Tran pointed to his ace in reference to his over card, which was his best hope. While the

flop did not deliver an ace, it did pair Tran's eight and give him some extra outs. The

turn was not one of them, and neither was the

The heads-up battle was a prolonged affair, lasting over two and a half hours, though the chip stacks never really fluctuated much during that time. In what would be the last hand, Smith raised to 16,000 from the button, Karmazinas three-bet to 41,000, Smith made it 76,000 to go, and Karmazinas moved all in. Smith made the call and was in good shape to double.

flop was interesting as it gave Karmazinas a flush draw, while the

turn made it seem a chop was inevitable. However, the

spiked on the river to give Karmazinas a flush and the win! 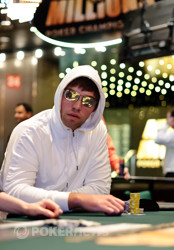 Elliot Smith raised to 16,000 from the button after which Karmazinas quickly three-bet to 41,000. Smith tanked for a bit before making it 76,000 to go. Now it was Karmazinas's turn to think and he eventually moved all-in. Smith said, "Al right", and made the call for around 260,000 total.

giving us a winner in the final Aussie Millions tournament we are covering in 2012!

Smith Takes it on the Turn

and Smith threw out 42,000 chips. Karmazinas folded giving another pot to Smith who's still in the underdog position.

Here We Go Again on a Break

Players are now on another 15-minute break.

Karmazinas raised pre flop to 12,000 and Smith called from the big blind. The flop came down

hit and Karmazinas checked behind. Smith was frustrated but smiled as he turned over

which made Smith hate the situation even more. Smith is slowly chipping up but Karmazinas still has a very solid lead in this ongoing heads up battle.

It's pretty quiet in the heads up between Karmazinas and Smith. The pots are small and we are waiting for some big action!

Another One For Smith

Dan Smith raised to 12,000 from the button and Karmazinas called. The flop came down

and Karmazinas check-called 12,000. The turn was the

and now the cost of seeing the next card was upped to 21,000 by Smith. Karmazinas called again and the river was the

. Karmazinas check-folded to the 42,000 bet Smith put out. Smith showed

and proved he wasn't afraid to bluff at it.