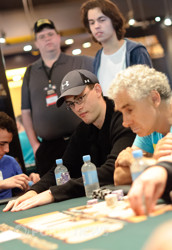 Tyron Krost was the winner of the 2010 Aussie Millions Main Event and now has quite the excuse to go for a second title every single year for the rest of his life as he's just won the "golden ticket" by defeating Tony Bloom heads-up in the Tournament of Champions.

A special event added to the schedule for this 10th anniversary Aussie Millions, eight of the nine Aussie Millions Main Event champions took to the felt with the eye on the prize: a lifetime entry to the very event they all once won. Krost came into the event as the youngest player at the table and was effectively the person with the most to win as he'd theoretically live the longest. Indeed it was Krost who took the title and will now have an entire lifetime to cash in on his winnings.

Tony Bloom raised all in from the button and Tyron Krost made the call from the big blind, once again creating an all-in situation during heads-up play with the chance to win the event and the "golden ticket."

for two overcards to Bloom's

and the nines for Bloom held up. After the

landed on the turn, some outs were taken away from Krost as he could no longer hit the

because Bloom would make a flush.

and found one of the outs Krost was looking for. He spiked his non-club ace to win the pot and take down the event, earning the "golden ticket" which awards entry to the Aussie Millions Main Event for an entire lifetime.

Another Double for Bloom

Tony Bloom moved all in from the button for 19,200 and Tyron Krost called from the big blind. Bloom held the

for two overs to Krost's pair of fours —

. The flop came down

and Bloom took the lead after flopping a pair of nines. He stayed there after the

completed the board and doubled back to nearly 40,000 in chips.

Tony Bloom was able to double back after his

held up against the

for Tyron Krost. The money went in preflop and the board ran out

flop after a series of raises back and forth. Bloom held top pair with the

, but he was out-kicked by the

landed on the turn and

With the blinds now up to 1,500/3,000 and no ante during heads-up play, Tyron Krost raised to 7,000 on the button. Tony Bloom defended with a call from the big blind and the flop came down

and Bloom check-called a bet of 9,000 from Krost. The river then completed the board with the

and Bloom check-called 26,000. Krost showed the

for two pair, jacks and sevens. Bloom mucked and Krost won the pot.

Tony Bloom raised to 5,200 from the button and Tyron Krost three-bet to 13,000 from the big blind. Bloom folded and Krost won the pot.

Check Out the PartyPoker Blog

Thanks for following along with our coverage of the 2012 Aussie Millions on PokerNews. Be sure to check out our friends at the PartyPoker blog as well for great posts by Mike Sexton, Tony G, Kara Scott, and Dragan Galic.