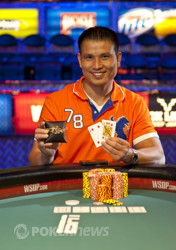 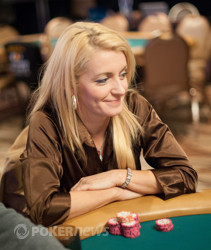 Chaib Saechao called from the small blind, and Patricia Baker checked her option. The flop came out

, and Baker fired out a big bet of 100,000. Saechao went into the tank for about 20 seconds, before announcing all in. Baker had less then 400,000 behind, but she was reluctant to call off the rest of it. After about 30 seconds, she said "I should have raised preflop" and folded her hand. This dropped her down to 360,000, while Saechao now has almost 2 million.

We are finally down to our final two players. Stay tuned as Chiab Saechao and Patricia Baker duke it out for the right to be called WSOP champion. 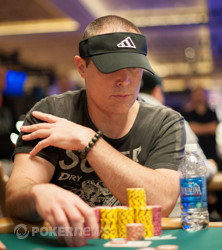 Baker Doubles Up Through Routos

At this point, I'm pretty sure that James Routos and Chiab Saechao don't have a chance to win this tournament. Routos came in for a raise to 55,000 on the button, and Patricia Baker came along in the big blind. The flop came down

, and Baker thought for about 15 seconds before announcing a bet of 238,000, which was also all of her chips. Routos wasted little time in calling, and Baker knew that she had been caught.

Both players caught a pair on the flop, but Routos was well out in front. The turn brought paint, but it was the

, and Baker would need a jack or a two to win the pot. The river brought paint again, but this time, it was the

that Baker was looking for. Baker doubled up yet again, and is sitting on over 600,000.

Action began with Patricia Baker, who completed from the small blind. James Routos checked his option.

and Baker led out for 100,000. Routos mulled over his decision and announced he was all in. Baker looked pained and eventually gave it up.

Baker Binks the Double Up Against Saechao

Patricia Baker limped in from the button, and James Routos called in the small blind. Chiab Saechao was sitting in the big blind, and he made it 60,000 on top to go. Baker came along for the ride, but Routos folded.

The dealer showed a flop of

, and Saechao thought for just a few moments before announcing all in. Baker snap called, and showed

for flopped top pair. Saechao caught no part of the flop, showing just

, and he would need some help. The turn came the

, and Saechao was still looking for an ace. The

hit the river, and Baker collected the double up.