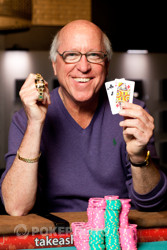 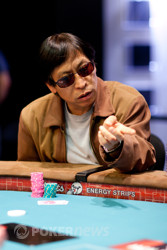 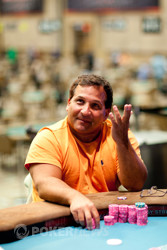 Action folded to David Arsht and he continued to apply pressure with a raise. Donald Auger defended from the big and even called a bet on the

flop, but when Arsht fired on the

turn, Auger shook his head and released his hand.

Arsht Starting To Pull Away

David Arsht has not let his foot off the gas since we got back from the break, and he is starting to pull away from his three opponents. On the first hand Al Barbieri raised in the cutoff, and Arsht three bet in the small blind. Barbieri called, and the flop came down

. Arsht led out, and Barbieri laid his hand down.

The next time he was in the small blind, Arsht raised it up, and Donald Auger called in the big blind. The dealer fanned out a flop of

, and Arsht continuation bet. Auger called, and the

hit the turn. Arsht led out again, and this time, Auger raised. Arsht called quickly, and the river was the

. Both players checked, and Arsht showed

face up, and Arsht took the pot.

flop saw Arsht check and Barbieri bet. Arsht then check-raised and Barbieri looked perplexed. "Really?" the man known as "Sugar Bear" said. "Did you find a big hand in the big blind, David?"

Barbieri then flashed the

and folded his hand.

Stephen Hung raised in the small blind, and David Arsht called in the big. The flop came down

, and Hung bet out. Arsht called, and the turn was the

. Hung check called a bet from Arsht, and the same thing happened on the river, the

The players are in their seats again, and the cards are back in the air.