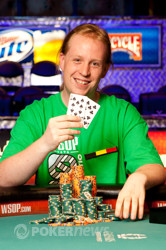 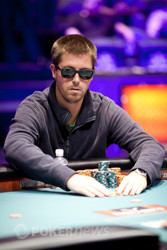 Jamie Armstrong opened to 250,000, Michael Gathy raised to 600,000 and Armstrong shoved all in. Gathy called and the hands were tabled.

and Armstrong was eliminated. Gathy secured his WSOP bracelet.

Michael Gathy has been stealing many hands and has now stolen the chip lead as well.

Gathy Pulls Close to Even

Jamie Armstrong opened for 240,000 on the button and Michael Gathy called. The flop came

for a full house and Armstrong mucked.

Big One For Armstrong 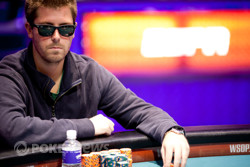 turn we saw Gathy check again, and Jamie Armstrong bet out 300,000. A call was made and to the river we went. The

for a pair of aces, which were good enough as Gathy mucked.

We had an all in and a call preflop.

and Gathy got back in the game.

Jamie Armstrong limped in from the button recently, and found Michael Gathy giving a friendly check. Both players saw a

landed on fourth street and the two players knuckled the table for checks. A

on the river saw a 555,000 bet from Gathy. Armstrong counterd by moving all in. After a few moments of contemplation Gathy threw it away and Armstrong took down the massive pot.