, Armstrong checked and Vaillancourt bet 260,000. After some thought Armstrong called.

, Armstrong checked and Vaillancourt checked behind. Armstrong mumbled an expletive and tabled

for the nut flush. The top two chip leaders switched positions after that pot.

Michael Gathy raised a recent pot to 60,000 after action had folded around to him in the cut-off. Eric Baldwin in the small blind then moved all in for 550,000. It folded back to Gathy who completed the call and cards were tabled.

Baldwin held a strong lead with his pair of kings, he just needed to avoid an ace and he could get right back in the thick of things here. A

board was released and Baldwin secured the double up he so desperately needed.

Baldwin Put to a Decision

Eric Baldwin opened for 65,000 and action folded around to Noah Vaillancourt in the big blind. Baldwin took several moments to consider his options. Ultimately, he decided the spot wasn't right and folded his hand. 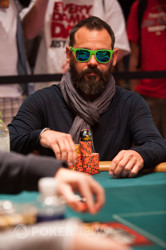 Short stacked Eric Davis moved all in from the button for 235,000. John Esposito in the big blind made the call and Davis was at risk.

flop exposed Esposito grabbed hold of a flush draw, to go along with his ace high. A

on the turn paired Davis, but in the worst kind of way as Esposito had hit his nut flush. A

fell on the river, but it changed nothing and Davis was sent packing.

Esposito Not Waiting Around

Eric Baldwin opened the action for 65,000, Jamie Armstrong called behind him and John Esposito shoved from the button. Baldwin folded rather quickly and Armstrong took his time to make a decision. He requested a count and Esposito's shove was for 530,000. 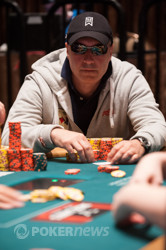 Jean-Louis Santoni opened from under the gun for 65,000, and action folded around to Noah Vaillancourt in the hijack who made it 135,000. Santoni completed the call and both players saw a

flop. It was here that Santoni checked and Vaillancourt fired out 80,000. Santoni immediately moved all in and was called by Vaillancourt.

Santoni possessed the lead with his pair of jacks, but any diamond or ace on the turn or the river would put the hand in Vaillancourt's favor. Indeed a diamond did fall as the table was shown the

on the turn and Vaillancourt grabbed hold of a nut flush. The meaningless

fell on the river and Santoni was eliminated.

The level ended and the tournament staff stepped in to race off the T1,000 chips.

Michael Gathy opened on the button for 50,000 and Noah Vaillancourt raised from the small blind to 124,000. Eric Baldwin folded his big blind and Gathy called.

and after some measured thought Vaillancourt bet 94,000. Gathy let his hand go and Vaillancourt took the pot. 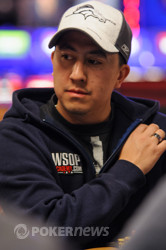 A short stacked Jason Manggunio moved all in from the button for 163,000 and Eric Baldwin in the small blind raised to 312,000. Eric Davis in the big blind folded, and we had ourselves a showdown.

flop was exposed and Manggunio failed to improve and was consequently eliminated in 8th place.