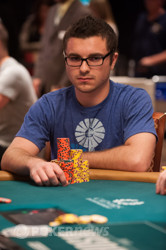 and Field was the first to go at the final table.

Players have been introduced and chips have been counted here at the official final table. One of these nine players will go on to find poker glory. Who will it be?

The introductions have been made and cards are in the air for the start of the final table.

The final nine players have taken a short break and action will be underway shortly. 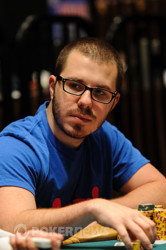 Dan Smith started out a recent hand by making it 53,000 preflop from the button. After the small blind folded action was on Noah Vaillancourt who three-bet to 128,000. Smith then countered by moving all in, and Vaillancourt made the call after a few seconds.

flop gave Smith a pair of sixes, but they were still second best to Vaillancourt's eights. A

on the turn actually gave Vaillancourt a straight flush. There was no card that could come that would save Smith, but a

fell on the river none the less.

We are now at our official nine-handed final table, we will have official chip counts shortly.

We've Got a Showdown

Noah Vaillancourt opened for 48,000 and Jamie Armstrong made it 125,000 from the button. The blinds released and Vaillancourt called. The flop came

. Both players checked and Vaillancourt tabled

to take the pot.

Handful of All Ins

The first few hands here at this final table of ten have consisted of raises preflop that end with the table folding. Joshua Fields and Jason Manggunio have also been pushing all in preflop and have taken down the blinds and antes with no show downs.

The final ten players have taken their seats and here are their counts.

Cards Are In the Air

Cards are now in the air on the Mother Ship, aka, the ESPN Main Stage.