The field is on their first break of the day. They will do a compete redraw and combine at ten players on the ESPN Main Stage in the Amazon Room. 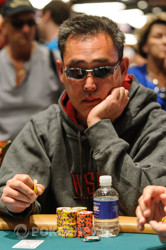 On the very next hand after Derek Wolters was eliminated, we had an all in preflop situation between Michael Gathy and Hok-Leung Wong.

[X] and Gathy made the straight to eliminate Wong. 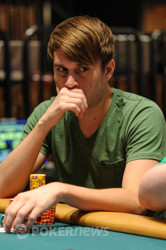 We missed the preflop raising but the short story is that Derek Wolters and Jean-Louis Santoni had an all in preflop showdown.

Santoni came from behind right way when a jack spiked on the flop. The board ran

and Wolters was eliminated. 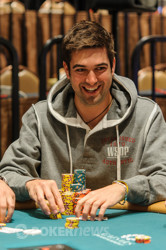 Dan Smith started the action by opened to 42,000 and Noah Vaillancourt raised to 93,000 from the cutoff. The blinds released and Smith re-raised to 177,000. Vaillancourt took some time to think and then called.

, Smith bet 146,000 and Vaillancourt called. But that took quite some time. The turn came

which both players eventually checked. The river brought the

All in all the hand took about ten minutes to play out. 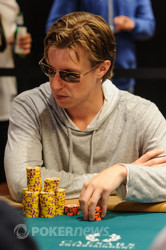 Joshua Field was on the button and opted to make it 40,000 to anyone who wanted to see a flop. Glen McCaffrey in the small blind then took a few moments before moving all in for about 340,000. Jamie Armstrong in the big blind then moved all in. Field quickly folded and we had a showdown.

board was exposed and McCaffrey was sent to the rail with 13th place's money.

Here is an update on how table #440 is fairing. 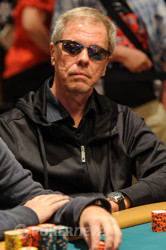 . Armstrong could only counter with

and needed some help if he wanted to knock out another player.

board came out and the two jacks were enough to send the unfortunate Green home. 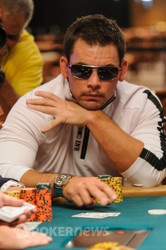 Jonathan Poche opened a recent hand by moving all in from the cut off. Jamie Armstrong in the big blind completed the call and Poche was at risk.

board ran out Poche was eliminated and we were down to 14 players.