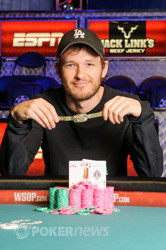 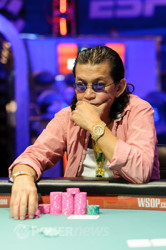 After the previous pot was chopped, Scotty Nguyen limped on the button. Joe Cassidy checked his option and the flop came down

Both players checked through to the

turn where Cassidy bet. Nguyen raised, Cassidy called, and the

hit the river. Both checked and Nguyen showed the

for ace-ten high with an 8-5 low to scoop the pot.

Cassidy bet, Nguyen raised all in for 140,000 total, and Cassidy called.

And Cassidy Knocks Nguyen Down Again 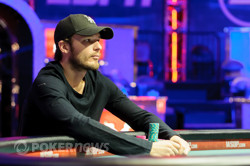 From the button Scotty Nguyen raised and Joe Cassidy called from the big blind.

and it got checked once more. The river was the

On the next hand Cassidy raised the button and Nguyen called. The flop came down

Runner Runner For Scotty, He Doubles Up

From the button Joe Cassidy raised and Scotty Nguyen called from the big blind.

and after some raised Nguyen's final money went into the pot.

giving Nguyen both a low and a flush in order to scoop the pot. He's right back in it.

Scotty Nguyen limped the button and Joe Cassidy checked his option in the big blind. The flop came down 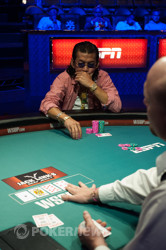 From the button Scotty Nguyen raised and Joe Cassidy called.

and Cassidy check-called. The turn was the

and the action got checked. The river was the

From the button Scotty Nguyen raised and Joe Cassidy defended his big blind.

board Nguyen ended up calling a bet on every street, costing him a total of 400,000 chips. Cassidy turned over

and he took down the whole pot.