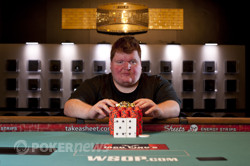 Defeat three tables and win a World Series of Poker bracelet. It sounds like an easy task in theory, but 365 people would disagree with you. That being said, one person was able to accomplish what the others could not and accumulate all of the chips on the table three days in a row. Brian Meinders was able to defeat Darin Thomas heads up to take home $116,118 in prize money and his first gold WSOP bracelet.

Despite being one of the smaller buy-in events at the WSOP, this event drew a rather stacked field. Many professionals swarmed to this event with the hopes of being able to attain WSOP glory. Among those to lose to their first table in this event were Joseph Cheong, Barry Shulman, Viktor Blom, Jonathan Little, Phil Hellmuth, Marcel Luske, Maria Ho and many more.

Fifty players were able to earn the title of Day 1 champion and lock up a guaranteed cash of $3,088. Of those fifty, only ten would move on to the final table. Several notable names came close on Day 2, only to fall short of making the prestigious WSOP final table. Greg Mueller, JJ Liu, Scott Seiver, Justin Bonomo, Matt Matros, and Mike Leah were among those to walk away from Event 25 with a min-cash. The ten who did make it on though were guaranteed at least $7,164 and only had to best nine others to attain WSOP immortality.

Play at the final table started out rather slow as the players went for three levels without seeing an elimination. However, someone wise once said that when it rains, it pours, and that idea was certainly applicable to the bust outs of this final table.

Our first casualty came when Christopher Hartman got the last of his chips in and was called by Matthrew Schreiber and Victor Ramdin. Schreiber was able to pair an ace on the river with his

and just like that Hartman was sent to the rail in tenth place.

After Hartman's elimination, players began busting from the final table at a rapid pace. The next to go was Ian Johns, who found himself fortunate enough to get his entire stack all in while holding

. Unfortunately, he was up against

of Brian Meinders, who was running remarkably hot. Sure enough, Meidners was able to spike the

on the river and send Johns home with $9,225 in ninth place money.

Sean Rice was the next victim of Meinders' fury, getting it in on a

. Unfortunately for Rice, Meinders held a higher ace in the form of

and it was able to hold through the fourth and fifth street.

Immediately after Rice's elimination, a short-stacked Schreiber got it all in before the flop against Christopher Vitch.

Schreiber was in good shape to find a double up here, but when Vitch paired up on the

flop, all of his hope seemed to fade away. The board finished with the

and Schreiber was sent to collect $15,474 prize money for his seventh place finish.

Preston Derden finished in sixth place when he moved his last 20,000 chips in preflop and was called by both Brian Meinders and Brock Parker. Parker held pocket kings and Meinders held ace-king against Derden's

. Continuing to run hot, Meinders found two aces on the flop and was able to eliminate Derden while also taking a nice sized side pot off of Parker. Parker would soon after be eliminated in fifth place when he moved in with

before the flop and was called by both Meinders and Vitch. Meidners was able to turn pocket nines into nines full of kings by the end of the hand, sending Parker packing.

Team PokerStars pro Victor Ramdin ended the day with a fourth place finish when he moved his short stack in with a gutshot on the flop and was eliminated by Meinders' middle pair.

After the dinner break, Christopher Vitch found himself losing a few pots and eventually moved all in with

. Thomas flopped a deuce and Vitch was unable to improve, sending him to the rail in third place and thrusting the two remaining players into heads up play.

Meinders had a fairly large chip advantage going into heads up play and he continued the aggressive style that he had been employing throughout the entire final table. Thomas put up a good fight but in the end if was Meinders who came out victorious.

Thomas got his short stack all in with

board. His pair was ahead of the

peeled off on the river. Thomas will take home $71,704 for his efforts.

Here at PokerNews we send our utmost congratulations to the newest bracelet winner and WSOP champion Brian Meinders!

That does it for our coverage of Event 25: $1,500 Limit Hold'em Shootout. Be sure to follow along on coverage of further events here at the 2012 World Series of Poker.

Meinders defeats Darin Thomas heads up for the title and the coveted WSOP Gold Bracelet. 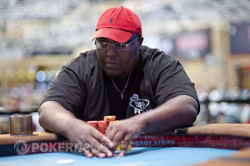 Brian Meinders raised preflop and a short-stacked Darin Thomas called. The flop was

and Thomas checked. Meinders bet and Thomas raised, and after a series of raises the two got it all in.

drilled the river, fulfilling both his straight and flush, and giving him the winning hand. Thomas will take home $71,704 for his efforts.

Thomas on the Roller Coaster

Darin Thomas' stack has been constantly up and down the last few minutes, firstly bleeding chips over a couple of hands. Eventually he was down to just 75,000. He then got his stack in preflop holding

and was up against Brian Meinders'

, with the ace-queen good enough for the victory. Despite that double-up, Thomas is still in need of some desperate help. 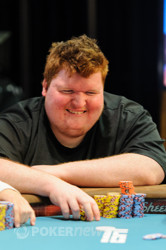 With the flop of

and Meinders bet once more. Thomas called but mucked when Meinders showed

for a flopped pair of nines.

Thomas Loses One After Doubling

Aggression is picking up here at this heads up match. Immediately after doubling up Darin Thomas four-bet his hand preflop and was called.

and Thomas continued out. Brian Meinders raised and Thomas called. The

turned and Meinders led out this time, causing Thomas to muck his hand, flashing the 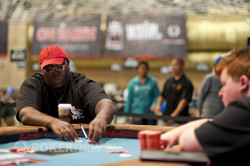 Darin Thomas just got the remainder of his stack in preflop when he and Brian Meinders put in just shy of seven bets (betting is uncapped when heads-up).

When the two players turned their hands over, it was looking like we would have our champion, Meinders well ahead of Thomas.

Thomas survived, while he still has a huge chip deficit.

Darin Thomas is hurting now, with his stack a pittance of what it was just a short while ago. The hand started when Brian Meinders opened the button. Thomas made the call and a

flop was dealt . Thomas check-called here and the

hit the turn. Thomas again check-called and a

completed the board. Thomas went with the check-call again and then he mucked his cards when Meinders tabled his

Meinders Gets Some Back 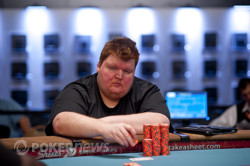 In a raised pot, Brian Meinders bet out on the flop of

turned and Meinders check-called another bet from Thomas. The river brought a fourth diamond in the form of the

for a flush with the five of diamonds. Thomas mucked and Meinders took down the pot.