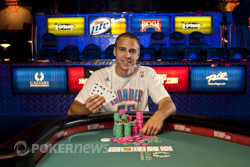 Last year, Austin Scott took eighth place in this event for $40,748. Not only did he better that performance this year, but Scott went on to win it all to grab his first-ever World Series of Poker gold bracelet and $361,797 in prize money.

When the day began, Vadzim Kursevich held the chip lead on the rest of the field. He stayed in front for nearly the entire day, but then the big clash came with Scott when action was four-handed at the final table.

in a massive pot of 3.7 million in chips. Kursevich held the

for a set of nines and Scott the

for top set of tens. The river completed the board with the

and Scott exploded to a massive chip lead.

When Scott got heads up with Brett Richey, he was a little over four to one in front. Richey did what he could to battle back, but in the end Scott was just too much.

On the final hand, Richey was all in on the turn with the

board. His two pair was up against the

for Scott. When the

landed on the river, Scott made a straight and won the tournament.

That wraps up [i]PokerNews'[/] coverage of Event 26 from the 2012 WSOP. Be sure to stay with us all summer long for our ongoing coverage and thanks for following along once again. Until next time, goodnight from Las Vegas!

Austin Scott captures a bracelet in Event 26. He beats Brett Richey heads up for the title.

Austin Scott gets hugs from his supporters after winning the bracelet 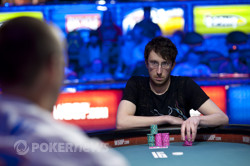 From the button, Brett Richey made it 100,000 to go. Austin Scott called and the flop came down

. Both players checked and the turn was the

for two. Scott held the

for a hand full of straight and flush draws.

and smacked Scott with a straight to the eight. He won the pot and eliminated Richey in second place.

For his finish, Richey earned the largest score of his career worth $223,492.

Austin Scott raised on the button to 100,000. Brett Richey called and the flop came down

. Both players checked to see the

land on the turn. Richey checked and then folded to a bet of 75,000 from Scott.

Scott Putting the Pressure Back On 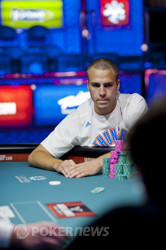 Austin Scott raised to 100,000 from the button and Brett Richey reraised to 300,000 out of the big blind. Scott called and that brought the two players to the

and Richey checked. Scott fired again for 325,000 and Richey folded.

Scott Picks One Up

Double Up for Richey 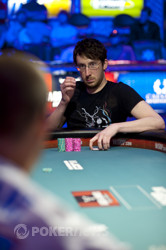 Brett Richey limped in from the button and Austin Scott raised to 150,000 from the big blind. Richey called.

for trip deuces with an ace kicker. Scott held the

for trip deuces with a king kicker.

. Richey's hand held up and he doubled to 1.79 million in chips.