Two Second Places for One

We are now heads up between Samuel Gerber and Max Steinberg. Neither player possesses a World Series of Poker bracelet, but that is about to change. Another thing both players have in common is that they have both been runner ups in 2010 WSOP events.

Once reaching heads up play both players teased each other about their second place finishes and wished each other good luck. 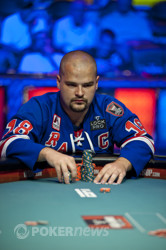 Matt Stout moved in for his last 210,000 after being crippled the hand before. Samuel Gerber made the call from the small blind, and Max Steinberg raised from the big blind. Gerber immediately got out of the way and cards were tabled.

and Stout was eliminated when he couldn't beat his opponent's ace high.

Action began on Max Steinberg, who raised to 170,000 from the button. Matt Stout re-raised to 425,000 from the small blind and Samuel Gerber pushed all in for about 2.2 million from the big. Steinberg tanked, but eventually landed on a fold and Stout snap-called to put Gerber at risk.

, giving Stout a royal flush draw and a plethora of outs to improve. However, the

river bricked out for Stout, who couldn't help but shout, "God!" in frustration.

Stout is crippled following the hand with just 400,000.

Matt Stout announced all in from the small blind, a bet that would put his opponent Samuel Gerber all in. Gerber quickly made the call and cards were tabled.

and Gerber was able to grab hold of another double up with ace high.

Matt Stout opened to 180,000 from the button and Samuel Gerber went all-in from the small blind for his last 490,000. Max Steinberg folded from the big and Stout called to put Gerber at risk.

board kept Gerber in the lead and he doubled through Stout.

Samuel Gerber raised it to 210,000 after Matt Stout folded the button. Max Steinberg then raised it up to 450,000. Gerber's response was to move all in for more and put Steinberg at risk. Steinberg snap called and cards were turned over.

and with Gerber missing his flush and ace draw he was crippled. Steinberg now sits with around 4,000,000.

Max Steinberg limped from the button, Matt Stout completed from the small and Samuel Gerber checked his option from the big for a three-way pot.

and Stout and Gerber checked to Steinberg, who bet 110,000. Stout called from the small blind, however, Gerber raised to 400,000 total. Undeterred, Gerber flatted, but Stout went all in for a bit over three million. Gerber insta-mucked and Steinberg fell hard into the tank. He eventually let his hand go and Stout scooped the sizable pot.

Max Steinberg completed from the small blind and Matt Stout raised it up. Steinberg moved all in and Stout quickly made the call.

and Stout's three of a kind tens were enough to earn him a double up. Players are all now relatively even in chips.

Gerber Grabs Some Off Steinberg

Samuel Gerber called from the big blind and Max Steinberg checked his option from the big to see a flop, which came

Gerber led out for 75,000 and Steinberg made the call. The turn brought the

and and Gerber fired again - this time for 175,000. Steinberg again called.

completed the board and Gerber fired 375,000. Steinberg folded and Gerber scooped the pot.