Max Steinberg limped in on the button, Matt Stout completed the small blind, and Samuel Gerber checked his option in the big blind.

and Stout bet out 115,000. Gerber was next to act and he raised to 315,000. Last to act was Steinberg who three-bet to 775,000. Stout quickly got out of the way, and Gerber took his time before ultimately following suit with a fold.

The action has been rather slow since our remaining three players came back from dinner. Most hands have been decided preflop or on the flop with no big hands developing.

Our remaining players have taken their seats and cards are back in the air!

Our three remaining players are now on a 75-minute dinner break. 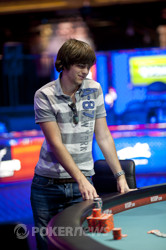 Max Steinberg raised to 110,000 from the button and Dylan Hortin raised all in for his last million from the small blind. Matt Stout folded from the big and Steinberg fell into the tank. He eventually announced, "Call," and hands were revealed.

and Steinberg eliminated Hortin with aces and fours.

Dylan Hortin raised it up to 100,000 from the button and found a caller in Samuel Gerber who was residing on the big blind.

on the turn saw a repeat of action with Gerber again check-calling a bet of 200,000.

for jacks and threes. Hortin mucked his cards and Gerber was awarded the pot. 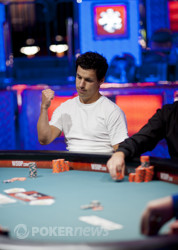 Action folded around to Matt Stout on the button, who went all in for his last 855,000. Samuel Gerber folded from the small, however, Joseph Marzicola peaked at his cards, shrugged and announced a call for the rest of his chips.

Marzicola had an ever-so-slight lead going into the flop, however the board ran out

, leaving Stout with a pair of kings for the win.

Gerber Back On Top 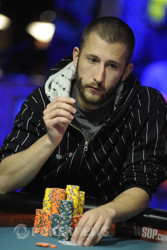 Max Steinberg opened to 110,000 in the hijack and and Samuel Gerber popped it to 270,000 from the small blind. A call from Steinberg landed a

followed on the turn. Both checked to see the

Steinberg went into the tank for about two minutes, but in the end kicked in his hand.