Steinberg Puts on the Pressure

Max Steinberg opened from under the gun for 90,000 and action folded around to Joseph Marzicola in the big blind who made the call.

and Marzicola check-called a bet of 105,000 from Steinberg. The turn saw an

land and Steinberg bet out 265,000 after Marzicola checked.

saw more of the same with Marzicola checking and Steinberg betting. This time Steinberg announced all in and Marzicola went into the tank. Marzicola talked a little letting the table know he had a bust straight and flush draw, but he still thought he was ahead. In the end though he threw it away. 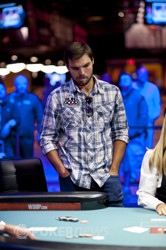 Action folded to Dylan Hortin on the button. He min-raised to 80,000 and found himself faced with a decision when David Nicholson three-bet shoved for 405,000 from the big blind. Hortin gave it some thought, but opted to call with

The dealer obliged, laying out a

flop to give Hortin a pair of sixes. Nicholson picked up a straight draw, but found no help from the

river to exit in sixth place.

This hand however saw Max Steinberg raise it up to 90,000 only to be three-bet by Dylan Hortin up to 210,000. Instead of simply calling Steinberg four-bet to 390,000. Hortin folded and Steinberg took it down.

Samuel Gerber opened to 100,000 on the button and Max Steinberg three-bet to 290,000 from the big blind. A call from Gerber landed a

Steinberg meticulously gathered chips for a bet and made it 330,000 for Gerbal to call. He didn't though, quickly folding his hand.

Matt Stout raised it up to 90,000 from the hijack and Max Steinberg called from the big blind.

leading to a Steinberg check and a 120,000 bet from Stout. Steinberg made the call and both players were witness to the

on the turn. It was here that both players checked.

on the river saw Steinberg take control with a tiny bet of 65,000. Stout made the call and Steinberg flipped over

Action folded to Matt Stout on the button and he went all in for 405,000. Samuel Gerber was in the big blind after mulling it over for about 60 seconds, he called with

and scored the double up when the board rolled out

"It's never easy," said a relieved Stout after he dodged the flush and straight draw. "I'm actually sweating."