We are now at our offical nine-handed final table. Players are on a short break and play is set to resume here at 2:30 PM. We will also have official chip counts and a table draw shortly. 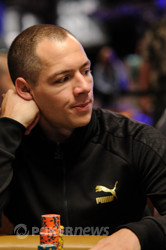 Mikhail Timoshin opened a recent hand from under the gun making it 32,000 to anyone who wanted to see a flop. Dylan Hortin in the big blind made the call.

and Hortin checked to the bettor. Timoshin fired off 35,000 and the bigger stacked Hortin moved all in. Timoshin made the call and was at risk.

Timoshin was going to need any spade, any nine, or any ten to stay alive. The

on the turn was no help, and neither was the

on the river. Timoshin was eliminated and Hortin has now crossed the one million mark with about 1,300,000. 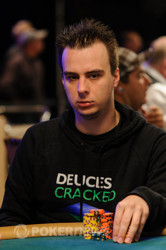 Ryan Laplante moved all in from the small blind and Vincent van der Fluit called all in for about 170,000 from the big blind.

and van der Fluit wasn't able to grab hold of anything and was subsequently eliminated.

prompting Joseph Marzicola to check-raise his opponent Matt Stout (who had bet 36,000), making it 75,000 to see a turn. Stout made the call and was granted access to the

on the turn. It was here that Marzicola fired out 100,000. Stout again made the call.

on the river slowed the aggressive Marzicola down, and we saw him check. Stout however jumped on the opportunity and bet out 200,000. Marzicola made the call.

Stout missed his flush draw and only held queen high, while Marzicola had a superior hand in two-pair aces and jacks.

Battle of the Bigs

Max Steinberg can't seem to avoid a pot and why should he, every pot he plays he seems to win. recently we caught him raising it up to 35,000 from the cut-off. Joseph Marzicola made the call from the button, as did Matt Stout from the small blind.

prompting a check from Sout. Steinberg wasn't going to allow any checks and bet out 50,000. Marzicola raised and made it 150,000. Stout folded and Steinberg made the call.

on the turn slowed Steinberg down and he checked. Marzicola however bet out, making it 250,000. Steinberg made the call and both players were witness to the

on the river. Both players thought enough betting had taken place and they knuckled for checks.

for top two pair and that was enough to take it down. 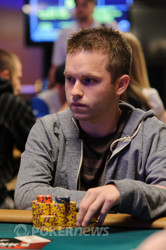 Steinberg continues to play hands and we recently saw him raise it up to 35,000 from the button only to be faced with a raise from Noah Bronstein. Bronstein had moved all in for 227,000 from the big blind and Steinberg opted to make the call and put Bronstein at risk.

and with a pair of jacks Steinberg was able to deliver the knock-out blow to Bronstein who finishes in 12th place. 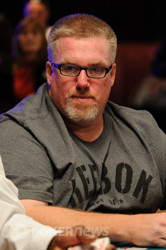 Bradley Kopelson opened from the button and made it 37,000. Max Steinberg three-bet from the big blind and Kopelson made the call.

flop was released by the dealer and Steinberg bet out 125,000. Kopelson countered the bet by moving all in for around 440,000. Steinberg made the quick call and Kopelson was at risk.

Kopelson need a lot of help if he wanted to be rescued from this hand, he received none as the

landed on the turn and the

filled up on the river. 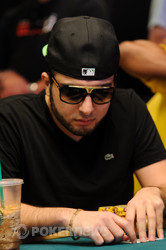 Justin Zaki moved all in from under the gun for 239,000, and right when it looked like he might steal the blinds and antes Christopher Shaw made the call from the big blind.

as Zaki was drawing dead on the flop to exit in 14th place.

Ryan Laplante opened for 54,000 from the cut-off and immediately faced an all in raise from Bradley Kopelson on the button. The blinds folded and action was back on the shorter stacked Laplante who made the call for his remaining 239,000.

and Laplante's aces were best. Kopelson was forced to send over a chunk of his stack because his ace jack came up short and now sits around 330,000.

Bradley Kopelson opened from middle position and made it 32,000. The table folded around to Matt Stout in the big blind and he three-bet to 88,000. A call was made and both players got to see a flop.

and Stout fired out 75,000. Kopelson's response was to raise and made it 175,000. Stout countered by moving all in for 372,000. Kopelson went into the tank contemplating his course of action. In the end though he opted to fold and threw it away. Stout was awarded the pot.