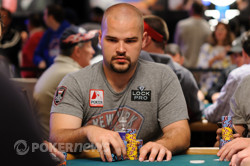 The day started off with a bang as the eliminations came at a brisk pace. Within for levels, the field was down to under 95 players, which meant more than 100 had hit the rail. Among the list of casualties was Andy Frankenberger, who is currently in contention for WSOP Player of the Year honors. In what would be his last hand, Andy Frankenberger bet 3,500 from the big blind on a board reading

only to have Ryan "Protential" Laplante raise to 7,900 from the cutoff. Frankenberger thought for a long time before moving all in for around 40,000, and was snap-called by Laplante.

Frankenberger shot out of his seat when he discovered his opponent had flopped the nuts, meaning he needed a six just to chop. The

turn was not it and neither was the

river. With that, Laplante chipped up to over 100K while Frankenberger was eliminated from the tournament in 165th place.

Likewise, it was a rough day for Brad Libson, who began as the chip leader but experienced a tumultuous three levels that result in an early elimination. We’re not sure where all his chips went, though a large chunk was sent over to fellow pro Matt Stout. On the very next hand after that, Libson was involved in a three-way all-in preflop with

board improved Libson's hand but gave another player the winning set. Libson was sent off to the cashier in 111th place to collect $2,767.

The remaining 14 players will return on Tuesday at 2 PM PST to play down to a winner. Join us then as we capture all the action and eliminations on our way to crowning the next WSOP champion.

In one of the last hands of the night, Ryan Teves moved all in under the gun for 200,000 and was called by Dylan Hortin in middle position.

It was a classic race situation, but Teves didn't like the

flop as it gave Hortin a pair of aces and the lead. The

on the turn meant Teves needed a four on the river, and while the

was close, it wasn't close enough. 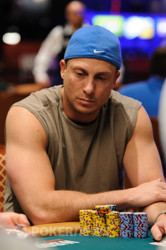 We caught the action on the

flop when Michael Dentale moved all in for around 250,000 from the cutoff and Joseph Marzicola made the call from the small blind.

Dentale had flopped top pair with a good kicker, but it was still behind the pocket rockets of Marzicola. The

turn was of no consequence, while the

river sent Dentale out the door in 16th place with a $15,722 consolation prize.

A short-stacked Minh Vu moved all in under the gun for 16,000 and was called by Michael Dentale in middle position. Max Steinberg came along from the big and both active players checked the

river, which got Dentale to fold, Steinberg rolled over

for quads, which of course defeated the

While we were getting the new table draw and chip counts, Jeffrey Romano busted from the tournament in 18th place. Unfortunately the details eluded us. 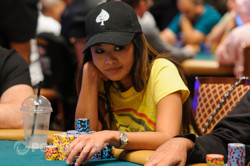 Lisa Hamilton, who you may recall won the World Series of Poker Ladies Event in 2009 for $195,390, moved all in from the button for 118,000. Max Steinberg was in the small blind and decided to move all in himself for 327,000, and surprisingly Minh Vu, who had both players covered, call from the big.

Hamilton was in bad shape, while Vu needed to catch either an ace or king to score the double elimination. The

flop gave Hamilton a little hope of catching another three, but the

meant she'd have to do it on the river. The dealer burned one last time and put out the