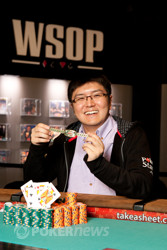 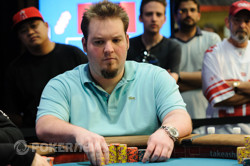 Was there really any doubt? It almost seemed that Naoya Kihara was destined to win this.

The final hand came when Kihara raised from the button and De Maci called from the big blind. The flop fell

for a pair of jacks.
De Maci:

for a pair a straight wrap.

to the the man from Japan two-pair and the title.

Congratulations to De Maci who put in a valiant effort these past three days. He played with a smile and was never afraid to put chips in the middle.

Chris De Maci has started to feel his way into this heads-up encounter after a bright start from Naoya Kihara. Here is a De Maci hand.

Kihara raised to 100,000 and De Maci made the call. The action checked down to the river on a board of

for the flush and Kihara mucked his hand.

De Maci checked, Kihara bet 310,000 and it was enough to win another decent pot.

The First Two Pots Go The Way of Kihara 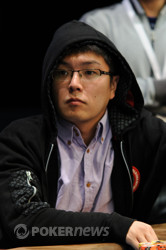 Chris De Maci made up the loose change from the small blind and Naoya Kihara checked. The flop was

In the next hand Kihara raised to 100,000 on the button and De Maci called. The flop was a rather sumptuous looking

. This is where it got interesting because De Maci check-raised to 360,000 after Kihara had bet 140,000. The ice cool lad from Tokyo made the call and we moved onto the turn. The dealer placed the

onto the felt and both players checked through to the

on the river. De Maci made the check and Kihara bet 630,000 and De Maci mucked his hand. 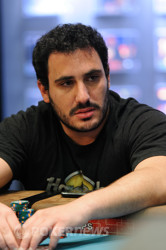 All of a sudden we're heads-up for the bracelet!

for a pair of kings.
Kihara:

Hindin looked at what his opponent opened and said, "The s#it you turn up!"

and that was no use for Hindin.

Daniel Hindin raised to 80,000 from the button and Chris De Maci defended the big blind. The flop was

and this time De Maci surrendered his hand in the face of a 290,000 Hindin double barrel.

Naoya Kihara raised to 100,000 on the button and Hindin made the call from the big blind. The flop was

Chris De Maci raised to 90,000 on the button and Kihara called in the big blind. The flop was

Kihara made up the small change from the small blind and De Maci checked his option in the big. Kihara then proceeded to check-call three-streets of De Maci value on a board of 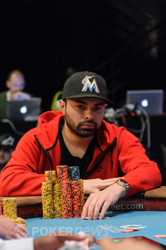 Close but no cigar again in this tournament for Hans Winzeler.

He raised to 140,000 from the button and Naoya called from the big blind. The flop came