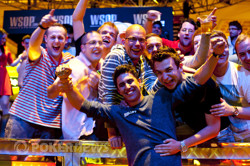 The third and final day of Event 36, $3,000 No Limit Hold’em Shootout, of the World Series of Poker has come to and end. After a final table of ten players resumed play this afternoon only Craig McCorkell remained to claim the WSOP gold bracelet and $368,593.

The ten returning players had to win two tables to make the final table. The first round saw a full ring table and Day 2 had six-handed action. McCorkell won his first bracelet and had to battle Jeremiah Fitzpatrick heads up to claim it.

The first elimination from the ten-handed final table was Sardor Gaziev. He went to a flop three-handed with Alessandro Longobardi and Jonathan Lane. The

and Tehan was eliminated and Lane took a serious chip lead over the table after his second knockout hand.

Thiago Nishijima didn’t lose a major pot while he was at the table, instead he bled chips for almost four levels. Lane opened for 50,000 and Nishijima moved all in. Lane called with pocket jacks and Nishijima held

and Nishijima was sent to the rail.

Another hour would pass before we saw our next elimination. Lane opened to 55,000, Craig McCorkell and Alessandro Romanello called from the blinds. The flop came

. The board bricked for Romanello and he was eliminated.

Another 30 minutes passed before Antonio Esfandiari opened for 65,000, Longobardi shipped on the button and Lane re-shipped over the top. Esfandiari folded and the hands were tabled. Lane had

and Longobardi was in trouble with

. The board ran ten high with only one diamond and Longobardi was eliminated.

and Esfandiari had pocket jacks. The board ran

and Polychronopoulos was eliminated.

We would return from the dinner break before the next elimination would come. Lane got his money after to flop of

and Esfandiari called. Lane was all but dead with Esfandiari flopping the nut straight holding

and Lane holding the low end with

During most of three-handed play Esfandiari held a dominant chip lead. At one point he held 75% of the chips in play and seemed to be in cruise control en route to his second WSOP gold bracelet.

But fate is cruel sometimes. Esfandiari first doubled up McCorkell and then lost a big chunk of his stack when he called Jeremiah Fitzpatrick’s all in shove with pocket sevens holding pocket nines. Fitzpatrick flopped a seven and left Esfandiari with just over one million chips.

Then he called another McCorkell all in when he held

and Esfandiari was suddenly the short stack. A shocked Esfandiari moved all in the next hand holding

and McCorkell called with

and Esfandiari was eliminated in third place.

The heads up battle between McCorkell and Fitzpatrick started with Fitzpatrick holding 3-1 chip lead. McCorkell worked his way up to even and then closed it out in just a few key hands.

Fitzpatrick had picked up some momentum before it came crashing to a halt. McCorkell three-bet and Fitzpatrick four-bet jammed and McCorkell called with pocket eights. Fitzpatrick held

and McCorkell locked up his first WSOP gold bracelet.

A Win for the Brits

Rowdy Brit drinks from his shoe

The beginning of the end for Antonio Esfandiari

Craig McCorkell and Jeremiah Fiztpatrick wait to see if Jeremiah is covered.

Craig McCorkell and supporters wait for the outcome 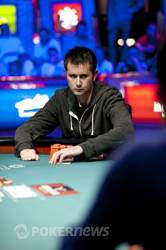 After being defeated in the previous hand, Jeremiah Fitzpatrick was forced all in in the dark. Fitzpatrick picked up

McCorkell took the lead on the

by pairing his ten, but Fitzpatrick was able to jump ahead when the

turned. Fitzpatrick ensured the double up on the

Fitzpatrick moved all in blind again the next hand and was called by McCorkell.

McCorkell had Fitzpatrick crushed and kept it that way on the

. McCorkell's victory was ensured when the

completed the board but by that time McCorkell was being lauded by his rail with cheers and celebratory chants.

Fitzpatrick, on the other hand, will take home $228,261 for his second place finish.

and Fitzgerald was left with just 45,000 after the stacks were counted.

Jeremiah Fitzpatrick has picked up two decent pots in a row. In the first hand, both players limped and the flop came

. McCorkell bet 70,00 and Fitzpatrick called. Both players checked the

turn. The river brought the

The second hand saw McCorkell open on the button to 120,000 and Fitzpatrick called. The flop came

Craig McCorkell opened to 120,000 from the button and Jeremiah Fitzpatrick called.

and Fitzpatrick continued the aggression by betting 250,000. Once again, however, McCorkell called.

Fitzpatrick eased up when the

dropped down on the river, allowing McCorkell to bet 390,000. Fitzpatrick folded and McCorkell dragged the pot and slid into the chip lead.

Jeremiah Fitzpatrick opened on the button for 150,000. Craig McCorkell re-raised to 385,000 and Fitzpatrick sat motionless.

Some of the crowd rose to their feet but then Fitzpatrick folded.

The two competitors have played a few hands and they've kept it small.