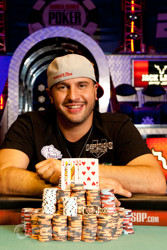 And there you have it. Michael Mizrachi is once again the $50,000 Poker Players Championship winner! After a five-day battle with some of the greatest poker players in the world, he came out on top. Mizrachi adds $1,451,527 to his massive list of results and he will now be in fourth place on the all-time money leader board.

The final table started off with a massive bang as Mizrachi won three in a row right away. On the third hand of play, during No-Limit Hold'em, he knocked out both Bruno Fitoussi and Bill Chen.

, and was miles ahead of Chen, who showed

board, both Fitoussi and Chen hit the rail.

Right from the start Mizrachi crushed his opponents, and it seemed like he was in a hurry to get to the winners party. Stephen Chidwick was the next one to go out, earning $253,497.

During Pot-Limit Omaha, Chidwick got his final money in on the turn with the board showing

for a full house, and Chidwick was drawing slim with his

and Chidwick was gone. Mizrachi already had almost half the chips in play at that point.

, but that was no good against Bloch's

And Then it Got Quiet

Luke Schwartz was by far the most talkative player at the final table, and his needling comments had many players cracking up. Schwartz couldn't get anything going at the final table, but his fourth place finish is impressive to say the least. This cash marks Schwartz's first in a non Hold'em or PLO tournament and also his biggest to date earning him $406,736.

During No-Limit Hold'em, Schwartz got his money in with

and was up against Chris Klodnicki's

and due to an unlucky river, Schwartz got eliminated. Klodnicki chipped up nicely and proved himself to be a real contender for the title. He took the chip lead, but that didn't last long.

Back in 2006, when this tournament was hosted for the first time, it was Andy Bloch who played a record-setting-heads-up match for the title against the late Chip Reese. In 2012 Bloch came close again, but this time he busted out in third place earning $561,738.

Bloch had a good shot at winning this thing with three players remaining, but eventually he ran into the brick wall that was Mizrachi. In Pot-Limit Omaha Bloch lost a big pot, and couldn't pull off a comeback. On Bloch's final hand he got his money in during Limit Hold'em, and both Klodnicki and Mizrachi called when he was all in pre flop. Mizrachi and Klodnicki both checked the

flop, and Bloch got heads up when Mizrachi folded on Klodnicki's turn-bet. Bloch turned over

and Bloch was sent home.

Mizrachi started the heads-up match with 10.5 million to Klodnicki's 5.7 million. For just a couple of hands Klodnicki got up to more than six-million chips, but from that point on it was the big Mizrachi show. Klodnicki stood no chance against the fearless, agressive and well-running Mizrachi who cruised to victory.

On the final hand in Omaha-8, Klodnicki was all in pre flop and showed

, and claimed the title when the board ran out 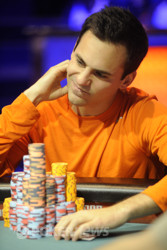 On the button, Chris Klodnicki raised and Michael "The Grinder" Mizrachi called to see the

and paired the board. Mizrachi checked, Klodnicki bet and Mizrachi raised. Klodnicki called. The river was the

for three kings and Klodnicki mucked, dropping down to 540,000 in chips.

On the very next hand, Klodnicki and Mizrachi raised back and forth to get the money in preflop after Mizrachi had opened from the button. The hands were on their backs and here's what was seen:

and Mizrachi had a straight draw while Klodnicki picked up a flush draw.

and Mizrachi made a ten-high straight. The river then completed the board with the

and that was it. Klodnicki couldn't hit to make the high and even make a low and was eliminated in second place.

Klodnicki earned $896,935 for the largest score of his career, but wound up just short of the title. That goes to Mizrachi and a complete recap will be coming shortly, so stay tuned.

A Small One For Klodnicki

Finally a pot for Klodnicki who needs a whole lot more to come back in this thing.

On the button, Chris Klodnicki limped in. Michael "The Grinder" Mizrachi raised and Klodnicki called. The flop came down

Every pot seems to be going Michael Mizrachi's way, and Chris Klodnicki can't find a way to stop his opponent.

Chris Klodnicki brought in and Michael "The Grinder" Mizrachi completed. Klodnicki called. Klodnicki then check-called on fourth and fifth, but check-folded on sixth and Mizrachi won the hand.

Michael Mizrachi had the bring-in, Chris Klodnicki completed and Mizrachi raised. Klodnicki called and check-called all the way down to seventh street. Klodnicki saved himself one bet and folded to Mizrachi's final bet, and he's now severely short.

Klodnicki Wins One and Loses One 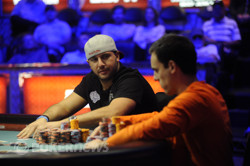 From the button, Chris Klodnicki raised to 80,000. Michael "The Grinder" Mizrachi called from the big blind and the flop came down

. Both players checked. The turn paired the board with the

On the next hand, Mizrachi raised to 90,000 on the button and Klodnicki called to see the flop come down 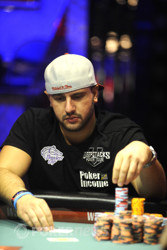 From the button, Chris Klodnicki raised to 80,000. Michael Mizrachi called from the big blind and the flop came down

for a rivered pair of aces and Klodnicki mucked his hand.