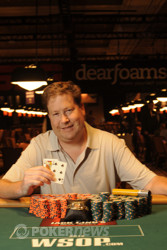 After 33 levels of play Event 53: $1,500 No-Limit Hold'em has officially come to a close. Neil Willerson was able to conquer the largest open field of the 2012 World Series of Poker so far to earn the $737,248 first place prize and the shiny gold WSOP bracelet.

Day 1 of this event saw an incredibly large sized field as 3,166 people put up $1,500 each to participate. Professionals and amateurs alike hit the felt with the dreams of earning a new piece of jewelry in the form of a WSOP championship bracelet. With the large field that turned out for this event it was an obvious reality that this dream would end for many. Among those who were unable to make anything materialize on Day 1 of play were David Benyamine, Lauren Kling, Kyle Cartwright, David Vamplew, Bill Chen, Ana Marquez, Bryan Devonshire, James Woods, and Lex Veldhuis.

The second day of this event saw 348 players return and we were only 24 eliminations away from the money. After six people shared the bubble together, the field burst into a thunderous applause that echoed through the cerulean-lit Amazon room. From there on out the bustouts came fast and furious as names like Ali Eslami, Matt Affleck, Steve Dannenmann, Cherish Andrews, Martin Staszko, Athanasios Polychronopoulos, Christina Lindley, and Rupert Elder hit the rail and added another WSOP cash to their name.

Day 2 finished with 28 players after adding an extra level to play at the end of the night. Notable names such as Victoria Coren and Lee Childs were able to move on to Day 3 but found their way to the rail before the final table was set. After a little more than three levels, 28 became the final 9 and our final table was set.

Action at the final table started off fairly slow as the players were relatively deep. The first elimination came in dramatic fashion, however, when Ryan Hughes got it all in with

. Hughes took the lead on the flop when it fell

. Hughes' two pair was quickly defeated though when the

turned and gave Mefodichev the nut straight. Hughes was unable to improve on the river and was sent packing as the first casualty.

Randy Ashe was the next to go when he got it all in with top pair and a flush draw against Hugh Henderson's flopped set of sevens. Ashe could not improve on the subsequent streets and was eliminated in eighth place. Bryan Piccioli was the next on the chopping block when he ran his

during a preflop all in. This hand crippled Piccioli and he busted soon after.

. Vladimir Mefodichev three-bet his entire stack all in from the button and the rest of the table folded. Mefodichev grabbed hold of a pair of aces on the flop and that was all she wrote for Chu. Chu will take home $126,770 for his sixth place finish in this event.

Matthew Graham was the next to go. Graham opened preflop only to be three-bet by Mefodichev who was running the table at this time. Graham called and the two saw a monotone flop of

. Mefodichev continued for 300,000 and Graham quickly moved all in.

Mefodichev was way in the lead with a flopped flush and Graham was in dire need of help. He did not receive help, however, when the

turned and was drawing dead to the

. Willerson check-called a bet from Humphrey and the

paired the board on fourth street. All of the money went in and Humphrey tabled

but was behind Willerson's trip fives with

. Humphrey did not improve on the river and he went home with a fourth place finish.

The players seemed to hit a wall during three-handed play with Henderson and Willerson trading chips back and forth through three all in pots and three double ups with each other. Eventually we found our third place finisher in Hugh Henderson. Henderson's

failed to improve against Willerson's pocket eights and he was forced to settle for a $322,866 payday.

Heads up play went back and forth with each player being at risk and somehow being able to weather the fight to stay alive. Play lasted an entire level before tournament staff enforced a hard stop ruling after 10 full levels. The two remaining players were forced to come back for a Day 4 to finish the battle.

On Day 4 the two sat at a new location in the Amazon room to finish their fight. Mefodichev and Willerson continued to trade chips for almost two full levels before Willerson was able to pull ahead. Mefodichev was able to double up his short stack once when his

. However, a mere few minutes later Mefodichev called all in on a {4g}

for a worse flush draw but was able to spike the

on fourth street to jump ahead with a pair. The board finished with a

and Mefodichev was forced to settle for a second place paycheck of $456,217 while Neil Willerson became the next WSOP champion.

Here at PokerNews we send our most sincere congratulations to Neil Willerson for being able to best the numbers and earn his first piece of WSOP jewelry. 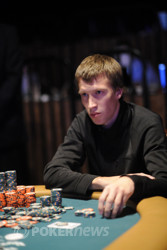 Neil Willerson had the button. He completed Vladimir Mefodichev checked. The flop came

Willerson announced that he was all in and Mefodichev called for his tournament life.

Both players had flush draws but Mefodichev was ahead with his king-high. The turn was the

, pairing Willerson, however, and he jumped into the lead. Mefodichev needed a king or a spade on the river to clinch a double up. The

did not help him and he was forced to settle for a second place finish and a payday of $456,217.

There have been a few small pots but nothing substantial since Mefodichev's last double up.

Neil Willerson had the button. He completed and Vladimir Mefodichev moved all in. Willerson called and the hands were shown.

Mefodichev was crushed and looking for a jack. Fortunately for him that's exactly what he found on the

rivered, giving him a double up.

With Neil Willerson's massive chip lead Vladimir Mefodichev seems to be tightening up and looking for a spot to put all of his money in the middle. Mefodichev has been folding more than we've seen him fold this whole final table.

Vladimir Mefodichev had the button and raised to 450,000 before the flop. Neil Willerson called and the flop came

Willerson checked for a second time and Mefodichev bet 1,300,000. Once again Willerson called.

and both players checked. Willerson showed

for two pair and Mefodichev mucked his hand.

Willerson is now up over eleven million in chips.

Neil Willerson had the button.

The two saw a flop of

completed the board and Mefodichev checked for a third time. Willerson bet 450,000 only to find Mefodichev come over the top for 1,350,000 total. Willerson folded and the Russian took down the pot.