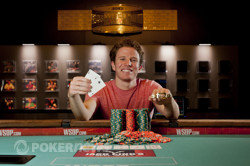 The Will to Win

Will Jaffe wins the WSOP Gold Bracelet in Event 54. He had to come back for a 4th day to claim it against Brazilian Luis Campelo.

Actor Robert Eiler, second from right, on the rail for Will Jaffe

Luis Campelo's rail goes nuts for the double up

Will Jaffe & Luis Campelo hug after the match

Will Jaffe gets a congratulatory kiss from his girlfriend, Abbie Houck

Will Jaffe gets a winner's hug 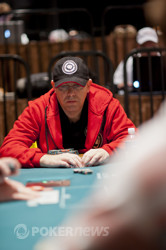 The now short stacked Luis Campelo moved all in from the button and Will Jaffe quickly made the call from the big blind.

fell on the river and Jaffe had the best of it. Campelo finishes the day in second place and takes home a $309,429.

All Ins and Folds

Play has changed from making it 400,000 from the button every hand, to folding the button or moving all in with both players trading off the blinds and antes.

Luis Campelo raised it up to 400,000 from the button and Will Jaffe came along for the ride from the big blind. The flop came

prompting a check from Jaffe, and a bet of 450,000 from Campelo. Jaffe quickly made the call and we were off to the turn.

then made an appearance on fourth street and both players knuckled the felt for checks.

on the river allowed for Jaffe to bet out 825,000. Campelo made the call and Jaffe flipped over

for two pair. Campelo mucked and Jaffe took the pot.

Will Jaffe just raised it to 400,000 from the button and and Luis Campelo announced raise from the big blind. Jaffe folded and Campelo took the pot.

Players are now set up on the Pavilion Stage, and play has consisted of both players trading off turns raising on the button and taking down the pot.