Another early elimination to report — James Brodie has followed Dirk Heuchert to the rail early today, after falling victim to Chiab "Chip" Saechao's

Dirk Heuchert entered Day 2 on a short stack, and soon he had it all in the middle with

Head to Wembley Stadium next May and join 30,000 other, in your attempt to win a share of €20,000,000. The International Stadiums Poker Tour, founded by Laurent Tapie and Prosper Masquelier, is revolutionizing poker by creating a tournament which starts with players using laptops, and concludes with a final table on the lawn of legendary Wembley Stadium.

Find out more by heading over to ISPT.com

*This is an advertisement 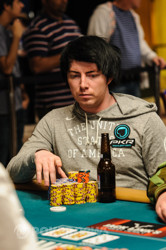 Hello and welcome to Day 3 of Event 59: $1,000 No-Limit Hold'em! Yesterday we saw the survivors of Day 1a and Day 1b merge together into a field of 726 combatants all vying for the title of World Series of Poker Champion. Of those players, only 51 would remain by the day's end with Alex Cordero as chip leader (822,000). This is especially impressive considering that Cordero was also the overall chip leader of both Day 1's.

Some notables who managed to make it to Day 2, but fall short include Jeff Madsen (456th), Jeffrey Manza (450th), Tony Dunst (424th), Phil Ivey (208th), Humberto Brenes (175th) and Konstantin Puchkov (381st), who made history by cashing a record-breaking eleventh time in a single series.

Of the survivors, all eyes are sure to be on Jake Cody (302,000). Cody won his first bracelet last year in Event 2: $25,000 Heads-up No-Limit Hold'em Championship and, at just 24 years of age, has already amassed over $3 million in poker tournament winnings.

Also in the hunt for a second bracelet is Chiab Saechao (145,000). Saechao took down his first bracelet after besting a field of 732 players in Event 1: $500 Casino Employees No-Limit Hold'em.

The remaining field is set to resume play at 1:00 PM PST and continue until either ten levels have passed or we get down to a final table of nine players. Though, with just 51 remaining, the latter seems much more likely. Stay with us here at PokerNews as we bring you all the action in our hunt for a final table!