Jonathan Hilton opened to 100,000 from the cutoff seat and was called by Alex Cordero in the big blind for a heads-up pot.

for a pair of jacks. Hilton mucked and Cordero scooped the pot - chipping him up to 1.6 million.

Nitsche Keeps Foot on the Gas 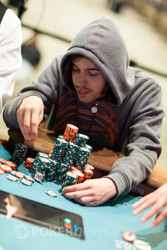 On the very next hand after eliminating Frankie Johnson, Dominik Nitsche raised to 100,000 from the cutoff and got two callers in Randolph Lanosga (small blind) and Sebastien Comel (big blind). The flop came

. Comel checked again, and Nitsche kept up the pressure, setting out a stack of green (25,000) chips for a bet of 400,000. Comel thought for about a minute before pushing his cards dealerward, and Nitsche gave him a little more to think about by showing one card — the 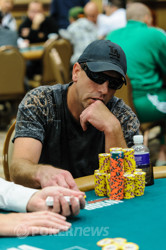 Sebastien Comel opened with a minimum-raise to 100,000 from early position, then Frankie Johnson reraised to 500,000 from the cutoff. Dominik Nitsche checked his cards, then announced he was reraising over the top all in. The blinds and Comel quickly skedaddled, and Johnson didn't hesitate before calling.

Pocket kings again for Nitsche! And a bad time for Johnson to pick up a big-but-not-quite-that-big pair. The flop came

, then the turn brought the

to give Nitsche a set and make the

just a bit of trivia.

The Nitsche express keeps rolling. He's still stacking, but it appears he certainly has more than half the chips in play now with five left. 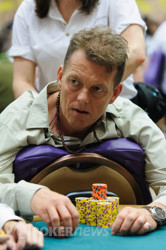 Martin Vallo pushed all in for his remaining 420,000 from early position and action folded around to Franklin Johnson on the button, who announced, "Call." Behind him in the big blind, Jonathan Hilton then announced he was all in himself for 1.1 million total. Action was back on Johnson, who folded after some thought.

Vallo's tournament life was in dire straits and the

board ensured his fate of a 7th-place finish. 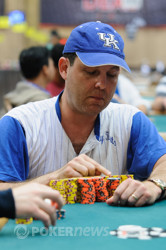 The applause congratulating Daniel Eichhorn for his ninth-place finish had barely died down when Jonathan Miller was pushing all in from early position with his last 275,000. It folded to Dominik Nitsche in the cutoff who called, the others got out, and the players flipped over their cards.

Miller had a better ace this time, turning over

, but Nitsche had a made hand with his

, and Miller is out in eighth. 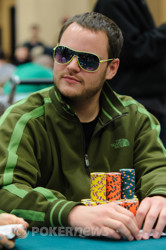 Daniel Eichhorn opened from the cutoff and action folded over to Dominik Nitsche in the small blind, who three-bet to 205,000. It folded back over to Eichhorn and he announced he was all in. Nitsche quickly called and hands were revealed.

Eichhorn was dominated and would need help going to the flop. No help came, though, as the board ran out

- leaving Eichhorn out-kicked and sending him to the rail.

We've just seen a third straight all-in situation in which a short-stacked player was at risk with a dominated ace and survived.

In this one, Alex Cordero opened for 125,000 from the button, then Daniel Eichhorn reraised all in from the small blind for 525,000. Frankie Johnson folded the big blind, and Cordero quickly called.

, pairing Eichhorn's ten but providing Cordero with a nut flush draw. The turn was the

The Dream is Still Alive

Dominik Nitsche opened to 80,000 from early position and action folded around to Jonathan Miller, who pushed all in on the button for his last 250,000. Action folded back to Nitsche, who quickly called to put Miller at risk.

- giving Miller another chop pot after being dominated preflop.