Jonathan Miller open-raised all in from under the gun for 270,000 total and got one caller in Frankie Johnson from middle position. Miller tabled

and needed some help against Johnson's

and Johnson was still in front. The

turn then brought flush possibilities for Miller. The dealer burned a card and delivered the river... the

, making a straight on the board and a chopped pot.

"The dream is still alive," said Miller with a grin to Sebastien Comel sitting to his right.

Jonathan Hilton opened to 80,000 from early position and found one caller in Franklin Johnson from the big blind.

and Johnson opted to lead out for 150,000. Hilton called to see a turn, which brought the

. Undeterred, Johnson fired again - this time for 300,000. Hilton thought a bit, but eventually slid his hand into the muck - conceding the pot to Johnson. 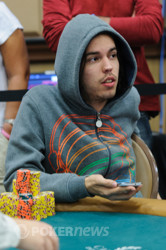 Dominik Nitsche has picked up where he left off before the move up onto the main stage, grabbing the last four hands in a row.

First Nitsche got a walk in the big blind. Then it folded to him in the small blind where he raised, and Jonathan Hilton stepped aside.

On the next hand it folded to Nitsche on the button and he raised again to 80,000, and Randy Lanosga called from the big blind. The flop came all clubs —

Nitsche opened with a raise again in the cutoff on the next hand, once more claiming the blinds and antes.

Randolph Lanosga opened to 90,000 from middle position and action folded over to Sebastien Comel in the hijack seat, who pushed all in for his last 525,000. Action folded back around to Lanosga, who folded after some thought.

Up On the Main Stage

After playing out Day 3 to this point over in one corner of the White section here in the Pavilion room, the final nine have been relocated up on the main stage now following the conclusion of Nick Schulman's triumph in Event 60: $10,000 2-7 Draw Lowball (No-Limit).

The players have all been introduced and after a brief delay cards are back in the air again. Dominik Nitsche begins the action up on the main stage as the big chip leader, with his 3.45 million about twice what nearest challenger Alex Cordero has.

Dominik Nitsche came back from dinner picking up pots and pushing his stack up close to 4 million. Just now he was raising again to 80,000 from the cutoff and got two callers in Martin Vallo (small blind) and Sebastien Comel (big blind). The flop came

Shuffle Up and Deal!

Our final nine have returned from dinner and taken their seats. Cards are back in the air!

Our remaining nine players left to go on a 60-minute dinner break just a short while ago. See you back at 9:07 PM PST.

Following Iakov Onuchin's quick elimination after the redraw at ten-handed, here's how the remaining nine are seated around the official final table.