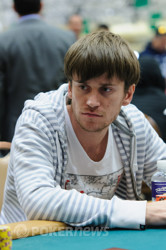 Randolph Lanosga opened for 90,000 from under-the-gun and action folded around to Iakov Onuchin in the cutoff seat, who pushed all in for about 550,000. It was folded back to Lanosga, who thought it over and announced, "Call," to put Lanosga at risk.

Iakov was in excellent shape to double going to the flop, which came

. Lanosga picked up outs with a pair of queens, but was still well behind. The

turn changed nothing, however, a

fell on the river - giving Lanosga two-pair and sending an unlucky Onuchin to the rail.

The table folded around to Joshua Prager in the small blind who looked down at his stack of almost 400,000, checked his cards, and declared he was all in. Jonathan Hilton called instantly.

, and gave a little half-smile as he saw what Hilton had woken up with —

flop only worsened the situation for Prager, and the

The remaining 10 players are now redrawing for seats around a single table. 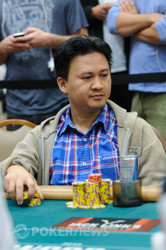 It folded around to Hieu Nguyen in the small blind who completed, then Dominik Nitsche put in a raise from the big blind which Nguyen called.

, and Nguyen only paused a beat before declaring he was pushing his short stack all in. Nitsche took even less time to call, tabling

for top set. Nguyen flipped over

for an open-ended straight draw. The turn was the

, and Nguyen is out.

"How could you call that?" joked Daniel Eichhorn afterwards to Nitsche. "All you have is a set and he has a straight draw… you're at risk!"

Nitsche chuckled in response. He has reason to smile, as that hand pushes him up over the 3 million-chip mark, enabling him to increase his lead with 11 left.

Sebastien Comel opened to 60,000 from under-the-gun and action folded around to Joshua Prager - who three-bet to 205,000. Undeterred, Comel slid his entire stack into the middle for an all-in bet for over a million and Prager quickly mucked. 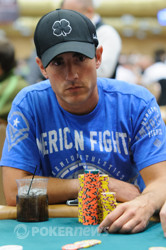 Daniel Thomas open-pushed his last 145,000 from under the gun, and when it folded to Daniel Eichhorn in late position he called the shove. The others got out, Thomas showed

The board rolled out

, and Eichhorn's two pair was best.

We're down to a dozen! 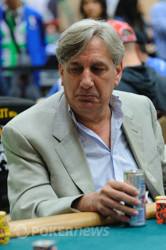 Yoav Tanenbaum opened for 80,000 from early position and he found one caller in Dominik Nitsche in the cutoff seat.

fell on the turn and, undeterred, Tenenbaum fired again - this time for 250,000. Nitsche again called.

landed on the river, Tenenbaum slowed down and checked - prompting an all-in bet from Nitsche for just over one million. Tenenbaum quickly called off his remaining 850,000 and Nitsche tabled

for a set of sevens. Tenenbaum turned over

for an inferior top pair, which caused Nitsche to shout, "Yes!" in celebration as he knew he had eliminated Tanenbaum.

Nitsche is up to 1.9 million after that one. 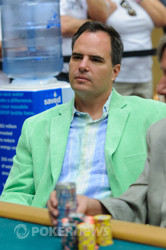 It was folded all the way around to James Taylor in the small blind, who pushed all in for a bit over 200,000 from the small blind. Iakov Onuchin snap-called from the big blind and hands were revealed.

Taylor's tournament life was in dire straits and the

board sealed his fate as our 15th-place finisher.

It's been a tough level for Hieu Nguyen, although he finally had something go his way just as the hour is coming to an end.

After pushing his short stack all in from middle position with

, Nguyen got called by James Taylor in the big blind with

, giving Nguyen a double and knocking Taylor down to short-stacked status.