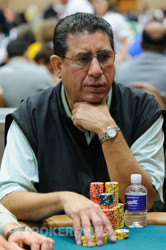 James Taylor limped from middle position, Alex Cordero limped as well from the button, Hieu Nguyen completed from the small blind, and Randolph Lanosga checked his option in the big blind.

. It checked to Lanosga who bet 72,000. Taylor and Cordero quickly folded, but Nguyen stuck around. The turn brought the

. This time Nguyen led out, betting 200,000. Then Lanosga raised to 500,000, causing Nguyen to shake his head in disbelief. Finally he folded, showing a

Another Cordero Bluff Works Out 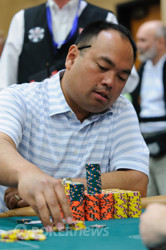 While that wild three-way all-in was playing out on one table, another interesting one was happening at the other involving Alex Cordero and Hieu Nguyen.

That one began with Cordero limping from the button, Hieu Nguyen completing from the small blind, and Randolph Lanosga checking in the big blind. The flop came

. Nguyen checked, and Cordero pushed out a bet of 118,000. After a lot of thought, Nguyen called.

, putting a fourth diamond on the board. Nguyen checked again, and Cordero took a look back at his hand before betting 250,000. That sent Nguyen deep into the tank for several minutes. Finally he folded, appearing to flash a

"Do you want to see?" asked Cordero, then turned over his hand —

! Nguyen walked away from the table in disgust.

"I won't bluff anymore," said Cordero to the others as he collected the chips.

We just watched what is probably the hand of the day thus far, one that appeared as though it would result in two eliminations with one card to come, but ultimately from which everyone survived.

It began with Jonathan Hilton raising to 150,000 from middle position, leaving himself but about 80,000 behind. It folded to Martin Vallo on the button who reraised all in for about 670,000, then it folded to Daniel Eichhorn in the big blind. Eichhorn studied everyone's stacks, then announced he was all in, and Hilton called.

"Just gimme a jack and a triple up," said Hilton. He got a jack all right — in fact, a couple — as the flop came

to put him in front. But the

Then came the river… the 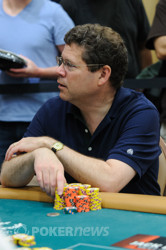 Iakov Onuchin opened to 52,000 from the cutoff seat and action folded over to David Steirman in the small blind, who went all in for his last 285,000. Onuchin quickly called to put Steirman at risk and hands were revealed.

all but sealed the deal for Steirman. The

turn did give him an open-ended straight draw, however, the

river bricked out for Steirman and he was sent to the rail in 16th place.

After seeing eliminations come at a clip of about once every seven minutes during the first four levels today, play has slowed considerably here at the start of Level 24.

Just now Sebastien Comel opened with a raise to 50,000 from middle position, then Daniel Thomas reraised to 115,000 from the cutoff. It folded to Daniel Eichhorn in the big blind who spent some time studying Thomas's remaining stack — about 350,000. Finally Eichhorn pushed out a four-bet to 196,000, and Comel quickly folded.

Thomas considered the situation for a long time — at least three minutes — along the way rechecking his cards and riffling his chips. Finally he let his hand go.

The remaining players — the "sweet sixteen" — are currently filling out bio sheets for WSOP staff in anticipation of the final table. When they're done, the first hands of Level 24 will be dealt.

We lost 22 players during the first two levels today, then another 13 during the next two. If that pace continues, we may be reaching that final nine sooner than later.

The remaining 16 players are taking a 20-minute break. Here's a look at the stacks they've left at the tables:

Tenenbaum Doubles Through Comel On Last Hand Before Break

Sebastien Comel opened to 50,000 from the small blind and Yaov Tenenbaum responded by three-betting to 150,000 from the big blind. Comel tanked for a bit, but then announced he was all in. Tenenbaum quickly called all in for his last 585,000 and hands were revealed.

flop propelled Comel into the lead, however, the

turn reversed Tenenbaum's fortune once more as he re-took the lead. The

river changed nothing and Tenenbaum doubled through.

It sounds as though we're having a change of plans, schedule-wise.