Alex Cordero raised from the hijack seat and got a caller in Andrea Tropea from the big blind. When checked to after the

flop, Cordero fired and Tropea called. The turn brought the

The river then brought the

and a check from Tropea. Cordero bet 225,000 this time, and Tropea took about three minutes to consider what to do. Finally he called, tabling

, somewhat amazed he had been called and yet still had the best hand.

"I was three-barrelling," he said. "I thought you had kings!"

That one knocks Tropea down to short-stacked status, while Cordero continues to increase his lead over the field.

Evan Orman was just getting up out of his chair to head to the payout desk when we arrived. All of Orman's chips were in the middle on a board reading

in front of him for a pair of aces. His lone opponent, Sebastien Comel, held the

for a set of eights, which was good enough to send Orman to the rail.

In the hand that would cripple him, Erik Hellman opened to 33,000 from the hijack seat and action folded around to Fernando Suaya in the big blind, who made the call.

completed the board and this time, Suaya announced he was all in for his last 211,000. Hellman fell into the tank, but eventually called after much deliberation. Suaya tabled

for a rivered flush and Hellman mucked.

Shortly thereafter, Hellman open pushed all in for his last 55,000 and action folded around to Evan Orman, who went all in himself. Everyone else got out of the way and hands were revealed.

board failed to improve Hellman's hand and he was eliminated.

Three-way action before the flop resulted in Sohale Khalili all in versus Alex Cordero, with Andrea Tropea having stepped aside in the face of the reraising.

and when the board came

, the table reacted with an "ohhhh" at the sight of the fourth heart on board. Cordero had made a flush, and Khalili was out in 29th.

Tropea shook his head and smiled, saying he'd folded pocket jacks. "Nice hand," he told Cordero, who was shaking his head, too, saying "it just played itself out."

Cordero increases his chip lead with that one, while Tropea is sitting wondering what might have been. 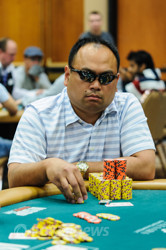 A wild and woolly first two levels saw 22 players hit the rail. Just 29 remain. Here's a peek at the top of the leaderboard to begin Level 22:

Our remaining players are now on a 20-minute break.

A short-stacked Thomas Fuller open-pushed all in from the button and was called by Franklin Johnson directly behind him in the small blind. Everyone else folded and hands were revealed.

, which failed to improve Fuller's hand and sent him to the rail.

We caught up on a completed board reading

. Fernando Suaya had a large stack of green chips in front of him from the big blind, which was a bet large enough to put Harald Olsen all in. Olsen, who was in the cutoff, tanked for some time, but eventually said, "Alright, I call." Suaya then tabled

for a bluff and Olsen flipped over

for just a pair of treys, which was good enough to scoop the pot. Many of Olsen's tablemates congratulated him on his good call. 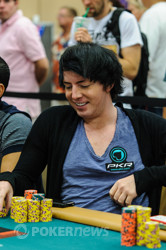 Jake Cody's table is currently buzzing following the elimination of the player whom all still left in the tourney appear to agree was the toughest opponent left. They are congratulating Daniel Eichhorn, too, for having done the deed.

and Eichhorn was there to challenge with

. The board brought no improvement to Cody's hand and he was eliminated. Meanwhile Eichhorn appears to have grabbed the chip lead for the moment with 33 left.