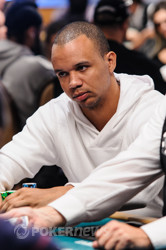 The first of two starting days in Event 59, $1,000 No Limit Hold’em, of the World Series of Poker is in the books. A total of 1,740 elected to play today and only 256 remain. Tournament officials stopped play once they had reached a point where just 15% of the field remained. Leading them all is Ronald Lee after bagging up 79,325.

Ivey’s stack never seemed to slip through out the day. He got involved in a big hand with another player that saw him chip up. He was at the turn on a

board. Ivey check-raised to 7,000 and his opponent shoved on him. Ivey called and tabled

. His opponent was ahead with

but the river fell

Hellmuth took to the felt today as well looking for his 92nd career WSOP cash. He was short-stacked before the dinner break and didn’t last much longer into the seventh level before he busted.

Day 1b will begin tomorrow promptly at 12:00 PM PST and the surviving players will combine for Day 2 on Friday. The Day 1b field will play the exact same amount of time that Day 1a played — that is, until 42 minutes are left in Level 9. Follow all the WSOP action live on PokerNews.com.

A Few More for Martinez Before Play Concludes

The announcement had already been made that all tables were to deal just one more hand. Over at Lucinda Martinez's table, that last hand took a little longer than at most tables, as three players — Martinez (small blind), the big blind, and the cutoff — had gone to a flop together.

All three had checked those first three community cards —

, at which Martinez fired 1,800 and both of her opponents called.

and another bet from Martinez, this time for 2,600. Her opponent to her left thought a while before folding, then the cutoff tossed his cards away and the bags brought over.

We're getting close... just one more table break away from the night concluding. Players at some tables, recognizing the end of play looming, are being sure to make final orders to the cocktail waiters passing through.

"Hey I'll buy Coronas for the whole room," said one player, looking as though he's safely going to make it through to Day 2. "They're free!"

Big Stacks Lurking in the Field

The End Is Nigh

Level 9 is underway. We're just 21 bustouts (or so) to play concluding for the evening.

Players are taking what will in all likelihood be the last 20-minute break of the night.