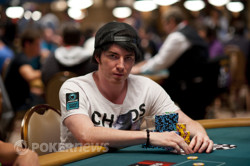 Jake Cody - one of the bigger stacks going into Day 2.

Jake Cody amassed the second-biggest Day 1b stack (77,600). Cody chipped up late in the day and scored a big pot after running aces into an opponent's

Now that both Day 1's are complete, we were able to obtain the final registrant and prizepool information. A grand total of 4,620 players entered, generating a prizepool of $4,158,000. First place will receive $654,797 — not too shabby.

Some notables who took to the felt today, but fell short and busted before the day's end include Angel Guillen, Kevin Saul, Faraz Jaka, Mickey Petersen, Dennis Phillips, J.C. Tran, Lauren Kling, Joe Cada and Andy Frankenberger — who fell victim to one of poker's most brutal coolers.

Play is set to resume tomorrow at 1:00 PM PST, where the Day 1a and Day 1b fields will merge and play out ten levels. Be sure to stick with us here at PokerNews as we burst the money bubble and work our way toward the final table!

Until then — goodnight from Vegas!

The tournament director has just announced that players will be dealt one more hand before bagging and tagging for the night.

Some last-minute scouting reveals a few more big stacks to report, the biggest belonging to Alex Cordero who is sneaking up on the 100,000-chip mark as we near the end of play.

We didn't catch the exact preflop action, however, it appeared that the player in the hijack seat opened and, directly behind him in the cutoff, Nam Le three-bet enough to put him all in. Everyone else folded and Le's opponent called all in for about 10,000 to put himself at risk.

board kept Le in the lead - eliminating his opponent and chipping Le up to 31,000 in the process.

So said a player earlier as he arrived at Humberto Brenes's table. Brenes responded with a grin. "I'm hungry!" he said, eyes wide.

Just now Brenes opened for 1,675 from middle position, and it folded around to that same player in the big blind. He checked his cards, and after flashing his hand quickly to Brenes he mucked. Brenes quickly showed his

Players are back and cards are in the air! We are looking at about 18 more minutes' worth of poker tonight before play concludes. At present 530 of those who began Day 1b are still with us, all hoping to join the 256 who made it through Day 1a.

Players are now on their final 20-minute break of the day.