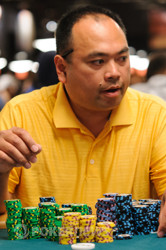 Today we saw a merging of the surviving players from Day 1a and Day 1b, which brought a total of 726 players together to duke it out. When all was said and done, just 51 would remain to see a Day 3.

Eliminations came swiftly and before we knew it, the money bubble had burst by the middle of the eleventh level. Some notables who were knocked out early, but still managed to cash include Jeff Madsen (456th), Jeffrey Manza (450th), Tony Dunst (424th) and Konstantin Puchkov (381st), who made history by cashing a record-breaking eleventh time in a single series.

Phil Ivey was another player to fall short on Day 2. After working his stack up to nearly 80,000 during level 13, Ivey's stack went on a bit of a roller-coaster ride - both swinging upward and downward as opponents doubled through him and he doubled through opponents. Ivey eventually met his end after pushing all in with

and losing out to Yoav Tenenbaum's

. Ivey's 208th-place finish marked his seventh cash of the series.

Alex Cordero (the overall chip leader of both Day 1's) used his abundance of chips to play many pots and put pressure on his opponents throughout the day. A key hand for Cordero occurred when he rivered the nut straight and got paid off by his lone opponent. Cordero's stack slipped a little toward the end of the night, but managed to come back strong by eliminating a couple of opponents in the last level.

Jake Cody will also be joining the field in Day 3. Cody's stack was anything but consistent throughout the day - both rising and falling as he found himself in big pots late in the day. By the end, Cody bagged up 302,000 and will be looking to make a run for a second gold bracelet.

Our remaining field will resume play tomorrow at 1:00 PM PST and continue until either ten levels have passed or a final table has been decided. Be sure to stick with us here at PokerNews as we provide you with all the action from the felt!

We've had few bustouts during the final hands of Day 2.

First, Cody Slaubaugh went out in 54th. Then the next bust came at the hands of Alex Cordero (again). Hoi Lee was all in before the flop with

, and when the board ran out

Soon after Jake Cody was knocking out Denis Simard with

The tournament director has just announced that our remaining players will be dealt five more hands before bagging and tagging for the night. Full chip counts and a recap will be provided shortly.

Alex Cordero's end-of-day rush is continuing in a big way. Just now Ravneet Johal was all in before the flop against Cordero with

, and when the board rolled out

, Cordero had made a set and Johal is out.

"Nice hand, sir," said an opponent from across the table to Cordero. "Just lucky," he said shaking his head and grinning. That big pot catapults Cordero into the chip lead with just a little left to go in the day. 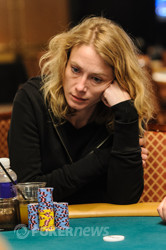 Claire Renaut has run out of chips to be eliminated as we near the end of Day 2. All in with

, and Renaut hits the rail just shy of the final 60.

Alex Cordero opened from the button and his opponent directly behind him in the small blind pushed all in for his last 110,000. Cordero tanked, counted his remaining stack, and eventually made the call to put his opponent at risk.

Cordero was slightly behind going to the flop, however, it came

, propelling Cordero into the lead with two pair.

Post-Flop Play with Jake and Frankie

Jake Cody opened for 17,500 from middle position and it folded around to Frankie Johnson in the big blind. He looked across the table at Cody, checked his hand, and then decided to call. "I'll call with these," he said, "and let you outplay me after the flop."

and Johnson quickly checked. Cody fired a continuation bet of 18,500, and after a pause Johnson pushed out a raise to 40,000. Cody sat motionless for several seconds, then called.

and a quick bet of about 125,000 from Johnson. Cody didn't take much time letting his hand go, and Johnson showed one card — the

Alex Cordero managed to lose quite a few of his chips these past two levels, however, he just scored a double up to get back to 300,000.

Cordero opened from the cutoff seat and action folded over to the player in the big blind, who shoved all in for more than Cordero had. Cordero tanked, but eventually announced, "Call," to put his last 140,000 at risk.

board kept Cordero in the lead and he doubled through.