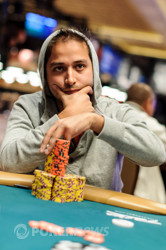 Allen Bari came back from break with just 52,000 chips and when Herbert Tapscott raised under the gun he decided to go for it. Bari three-bet from the hijack to 45,000 with just 7,000 behind and Tapscott called. Bari's opponent put him all-in in the dark and Bari tossed his final chips into the pot.

when Bari showed his

as he managed to flop two pair. Tapscott had

for the nut low draw, a flush draw and a pair of eights. The turn was the

hit the river Tapscott got it all. He rivered a bigger two pair and Bari made his way to the exit finishing in 15th place.

First Break of the Day 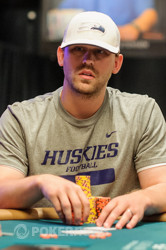 Ryan Turner managed to chop when he was all-in one time but the very next hand he was out. He was almost all-in in the big blind and he called when Ramon Davis Set him in.

to give Davis full house. Turner said his goodbyes and headed to the payout desk. 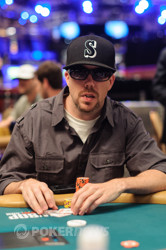 We just witnessed two hands that ended Daniel Ratigan's tournament run in 17th place. We caught the first hand on the river when the board read

. Ratigan had checked to Bryan Jolly who fired out 24,000 and Ratigan tanked for almost 30 seconds before committing the chips, leaving himself with just 18,000 chips. Jolly showed

and Ratigan was visibly disappointed with the hand his opponent showed. After double checking his cards numerous times he threw them into the muck.

The very next hand Ratigan was in the small blind and Tapscott decided to limp for 12,000. Bari and Schwecke called from the cutoff and the button before Ratigan moved all in. Griffin called from the big blind as did the other three players giving us five way action on the flop with one player all in for his tournament life.

and Griffin lead out for 12,000. Tapscott and Bari called while Schwecke mucked his hand. The turn was the

and Ratigan got up from his seat. Griffin bet 24,000 this time and Tapscott was the only caller. On the river the

showed up and Griffin put in another bet. Tapscott tanked for a bit before releasing his hand and Griffin showed

for a king-high straight. Ratigan flashed his

Davis and Jolly Back on the Up

Raymond Davis and Bryan Jolly both took down pots at the same time on each table.

Davis was one of two callers after John Racener opened. Davis was the only caller on the

river after both players checked the

turn. Davis had a boat with

Jolly, Allen Bari and Tyler Schwecke all saw a

flop. Bari led for 12,00 and was called by both players to see the

turn. The action was checked to Jolly and his 24,000 bet was only called by Schwecke . The river was

for the nuts and scooped.

Kleist Takes it With Two Pair 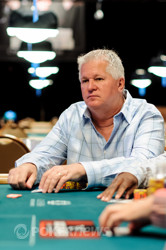 Michael "Boonie" Kleist just raised to 24,000, Raymond Davis three-bet to 36,000 in position and Ryan Turner called from the small blind. Kleist called as well giving us three-way action on the flop. The flop was

and Turner lead out for 24,000. Kleist decided to raise to 48,000 and that got Davis to fold. Turner made the call and the river was the

. Both players checked and Turner said, "Two pair". Kleist immediately replied with, "How big?," and got shown

for deuces and nines. Kleist showed

for queens and deuces and he took down the pot.

Allen Bari won a nice pot off Tyler Schwecke and then gave some of it to Daniel Ratigan when he doubled him up.

Schwecke opened from under the gun and then called all three streets when Bari led into him from the big blind. The final board read

Two hands later Ratigan was all-in on a

flop. Herbert Trapscott moved out of the way but Bari called with

and the board ran out to make him a full house. 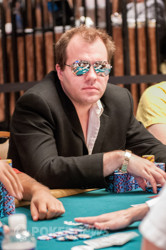 We just lost one of our three remaining bracelet winners, Dutch Boyd. We caught the action on the flop which read

and Boyd saw his 10,000 bet got raised and he made the call. The turn was the

and Boyd checked to Mascio who fired out 20,000. Boyd tanked for a bit before sticking in his final chips and Mascio made the call.

. Mascio had already made broadway and with no low possibilities Boyd was looking for a king or a queen to hit a full house or chop the pot with the same straight if a ten hit the river. The two time WSOP champion als had a flush draw to add to his outs but the river was the

giving just a slightly improved hand, but he was not able to beat Mascio's straight. Boyd goes home in 17th place.