Last Level of the Day

The initial idea of playing down to a winner just got changed. We are playing one last level, and if there's not a winner by the end of it, we will return tomorrow to play it out.

Short Break Marks the End of the Level

A 20-minute break was announced, but the players negotiated that down to ten minutes. 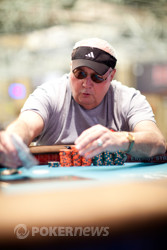 Gavin Griffin was caught bluffing on the river of a

Herbert Tapscott checked to him and called the 160,000-chip bet. "Ten-high. Nice call," said Griffin when he saw his opponent's

Down to a Winner

Whatever happens we are going to play down to a winner tonight. That is the information we just got from the tournament director. The limits are huge and it could all be over in a matter of hands, but with the current pace it could also still take a couple of levels.

Griffin limped from the button and Tapscott raised. Griffin followed with the quick call and the flop brought out

and Tapscott bet 160,000, Griffin called again. On the river

for the nut straight. Tapscott had

and mucked his top set. 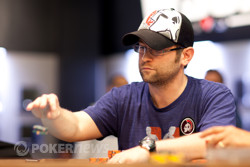 Gavin Griffin threw his cards into the muck on the river prompting one of his railers to shout, "Shake it off, Gavin."

and Griffin called an 160,000 bet before both checked the 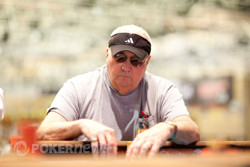 Herbert Tapscott is on top of things as he just won another important pot. Tapscott raised to 160,000 from the button and Griffin called. The flop came down

and Griffin checked again after which Tapscott bet 160,000. Griffin decided to raise making it 320,000 and Tapscott called.

. Tapscott increased his lead and is looking very strong at the moment.