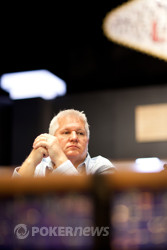 Michael "Boonie" Kleist is the latest player to be go after he was eliminated over the course of two hands by Gavin Griffin.

Boonie opened and called Griffins's three-bet to see a

flop. He checked called a bet here and on the

but managed to scoop.

That left Boonie with just 50,000 chips in the big blind. Griffin isolated him by raising and the cards wee on theit backs.

to give Griffin two-pair.

The players are on a 20-minute break. Official chip counts coming right up.

Gavin Griffin raised to 100,000 and Herbert Tapscott made the call. The flop brought

and Tapscott check-folded to another 100,000 chip bet.

. "Runner runner," Tapscott announced but the turn, the

, didn't help him out. Hua is back in the race while Tapscott dropped a lot of chips. 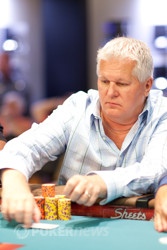 Michael "Boonie" Kleist has been very quiet since dinner but not anymore.

He was down to 95,000 in the small blind and called all-in after a Herbert Tapscott raise and Ashly Butler call.

board was checked all the way down. Boonie opened

for two-pair and scooped the main pot.

Boonie has the most support on the rail and they went wild! 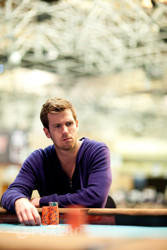 From the cutoff Gavin Griffin raised to 100,000 and John Racener called from the small blind. Herbert Tapscott was in the big blind and decided to call as well. The flop was

and Racener lead out for 50,000 getting both his opponents to call.

and Racener was all-in for his final 10,000 chips. Both his opponents made the call. Racener showed

against Griffin who had

Griffin picked up the low half of the pot with the nut low and the high went to Tapscott who had made two pair, eights and deuces. Racener was left with two pair, deuces and sixes, and he got eliminated from the tournament in sixth place.

Tapscott Movd into the Lead

Herbert Tapscott was down to around 65,000 not so long ago, but he just won a pot to take over the lead from Gavin Griffin.

Griffin had a stab on the river and was called by Tapscott.

for queens.
Butler had open folded

just before this and was instantly regretting it after he saw his opponents' hands. 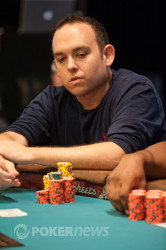 Thayer Rasmussen just raised all in for 95,000 and he got called by Gavin Griffin who was on the button and Can Kim Hua who was in the small blind. John Racener was in the big blind with just 105,000 chips left behind and after giving it some thought he opted to fold.

hit and Hua bet another 100,000. Griffin immediately threw in 200,000 and the pressure was back on Hua. He gave it some thought before making the call leaving himself with just 45,000 chips left behind.

for the nut straight and Rasmussen was done, he showed

and had failed to improve. Hua was frustrated and didn't want to show his cards, but since this was an all-in showdown the dealer tabled his

. We are down to six players with two players in dire need of a double up.

He was all but out the door but as it turned out Herbert Tapscott wasn't going anywhere. Herbert Tapscott just made it 100,000 from under the gun +1 and Hua defended his big blind. The flop came down

and Hua lead out for 50,000. Tapscott called and the turn was the

On the river the

popped up and Hua checked to Tapscott who now put in 100,000. Hua tanked for a bit before folding and Tapscott is right back in this thing! The stacks are shallow and anything could happen with these seven remaining players.