Gavin Griffin raised from the button and bet the flop and turn. John Racener peeled from the big blind and called the two extra bets before they both checked the river.

The final board read

"F##k!" responded Racener as he looked at his opponent's

As there are 4.3 million chips in play, there are just 43 big bets in play now!

Griffin Gets Scooped and Quartered

From the cutoff Ashly Butler raised to 80,000 and Gavin Griffin called from the big blind. On a

flop Griffin check-called a 40,000 chip bet. The turn was the

showed up and Griffin check-called another bet. Butler showed

for the nut full house and a low. Griffin mucked and Butler raked in a nice pot.

A couple of hands later John Racener raised under the gun to 80,000 and Griffin defended from the small blind. The flop came down

and Griffin lead out for 40,000, Racener called. The turn was the

and Griffin bet 80,000 after which Racener made the call once more. On the river the

hit and Griffin checked to the 2010 WSOP Main Event runner up who bet 80,000. Griffin called and was disgusted when he saw Racener turn over

for a pair of kings and the nut low. Griffin had

for the same low but only got a quarter of the pot since he couldn't beat the high hand.

Griffin is slipping while Butler and Racener are regaining some ground in this hard fought battle for the gold!

John Racener seemed to be upset with himself after he lost a pot to Herbert Tapscott.

Racener raised from the cut-off and was only called by Tapscott one seat along. The flop came down

turn and river were checked through and Tapscott opened

. Racener shook his head and folded.

Can Kim Hua raised to 80,000 from the hijack and John Racener made the call from the cutoff. Herbert Tapscott called from the button and both blinds folded their cards. The flop came down

and Hua checked to Racener who bet 40,000 and got called by both his opponents. The turn was the

and Hua checked again. Racener threw out 80,000 with very little behind but he got no action. Tapscott is really short once again while Racener is back in the hunt. 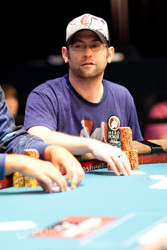 Gavin Griffin is going to take some stopping

Gavin Griffin is the chip leader and using his stack to pile pressure on his short-stacked opponents. He's opening most pots that are folded to him.

flop. He check-called a bet here and on the

for two-pair. Judging by Racener's reaction we think he was rivered by Griffin.

Triple Up For Tapscott

Herbert Tapscott just lost a pot against Gavin Griffin knocking him all the way down to just 75,000 chips, but shortly thereafter he found a spot to triple up. In the first hand Griffin raised to 80,000 from the cutoff and Tapscott called from the big blind.

and both players checked. On the turn, the

, both players checked again. The river was the

and Tapscott double checked his cards before betting 80,000. Griffin called and Tapscott mucked his hand immediately. Griffin had to show and tabled

for a pair of fives and a low.

Two hands later Tapscott was on the button and called all-in when John Racener had raised it up to 80,000. Rasmussen called as well and on a

the hand got checked out. Racener showed

and with two pair he took the small side pot from Rasmussen. Tapscott showed

for the wheel and he scooped to main pot in order to stay alive in this tournament.

John Racener will feel a lot better about life after he doubled through Gavin Griffin.

He was on the button and called a raise from Griffin. From there he took over the initiative and bet all the way down the

board. Griffin check-called all the way.

for no part of the pot. 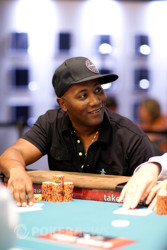 Raymond Davis out in 8th

Davis called all-in for his last 10,000 after Rasmussen raised to 80,000. Michael "Boonie" Kleist came along for the ride but folded when Rasmussen led for 40,000 on the

for the nut flush.
Davis:

"Wow, I'm in better shape than I thought!" said Davis.