"It's Hard to Kill a Man From Alabama"

John Racener opened up the action with a raise to 80,000 and Herbert Tapscott called all in for 65,000. Thayer Rasmussen called in the cutoff and the remaining players folded. The flop came down

and both Racener and Rasmussen checked. The turn and river, the

, got checked as well and we got to see a a three-way showdown.

for the nut flush and he took down the main pot. The small side pot was for Racener who showed

and Rasmussen showed his

before mucking his cards. "It's hard to kill a man from Alabama," Ashly Butler said to Tapscott who smiled, nodded and stacked his chips. We are still with eight players.

We still have eight players remaining in this event. The blinds and limits are very high now so expect the eliminations to come thick and fast.

See y'all in one hour.

I was beginning to think this game was all about chopped pots as no one could win one outright, until now that is.

Thayer Rasmussen was all-in for his remaining 55,000 and was called by Gavin Griffin, and Can Kim Hua. Griffin and Hua were both happy to check the

board all the way down.

for two-pair and the pot.
Griffin:

We are seeing a lot of chopped pots as of late and the short stacks are surviving. Both Thayer Rasmussen and Herbert Tapscott survived their all-ins and we are still with eight players. We will be on a one hour dinner break in 17 minutes. 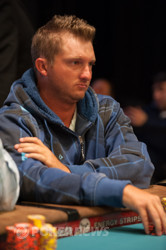 Can Kim Hua had the best of Bryan Jolly all day and he just busted him in 9th place. First Jolly limped for 30,000 and Hua called from the button. Tapscott folded his small blind after which Butler checked his option in the big.

and Butler checked to Jolly who bet 30,000 and both his opponents called. The turn was the

and both Butler and Jolly checked. Hua bet 60,000 and Butler went in the tank. After a good minute he folded and as soon as Jolly released his hand Butler said, "I made a big lay down. I had queen-nine of spades". Jolly was left behind with very little chips and a few hands later those went into the middle.

for a pair of aces and a back door flush draw. Hua turned over

for a pair of kings, the nut flush draw and a straight draw. The turn was the

completing Hua's flush and the river was the

Hua's a Giver and a Taker

Can Kim Hua took anther pot off Bryan Jolly and then gave them straight to Michael "Boonie" Kleist.

He called Jolly all the way down a

board and then raised the river. Jolly wasn't happy but made the call to be shown

for a straight. His

was only good for a quarter of the pot.

Then Hua raised and was called by Boonie and one other player. Post flop Boonie took over the initiative and led all the way down the

board. Hua was the only caller and he mucked when Boonie showed him

for the nut flush