and all three players checked. The turn was the

and Butler checked to Rasmussen who bet 40,000. Both his opponents called and the river was the

. Butler lead out for 40,000 both players folded. Short stack Butler took down this crucial pot giving him a lot more breathing room with the blinds about to go up.

Rasmussen Gives Up on the River

Thayer Rasmussen opened from the cut-off and called when Raymond Davis three-bet from the button.

board. Rasmussen stayed with him all the way but conceded defeat on the river and folded.

Ashly Butler is our short stack and he just raised to 40,000 from the button. Thayer Rasmussen was in the small blind and he three-bet to 60,000. Butler called and the flop came down

. Rasmussen bet 20,000 and Butler followed with the call.

and Rasmussen hesitated before deciding to check. Butler checked behind and the river was the

. Rasmussen grabbed chips and threw out a 40,000 bet which got Butler talking to himself. Every bet counts at this point and Butler tanked for a bit before folding.

Let's Get This Final Table Started

Each of the final nine players have had their bios read out as a way of introduction, and play is back underway. There are still 15 minutes left of this level.

The remaining nine players are now on a 20 minute break. We will get the official chip counts before the final table starts. 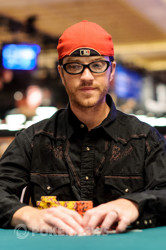 From middle position Michael "Boonie" Kleist raised to 40,000 and Can Kim Hua called from the button as did Self from the big blind. The flop came down

On the turn the

. Kleist had already made a straight and Self was looking for a king or a queen to make a full house in order to stay alive. The river was the

and that ended things for Wes Self. We are down to the final table and will get back to you shortly with the official chip counts. 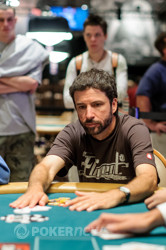 Greg Mascio was under the gun with just 16,000 chips after he had just three-betted pre flop and folded on the flop. He moved all in and it got to Thayer Rasmussen who raised to 40,000 from the button. Davis gave up his small blind and after a couple of seconds Racener kicked it in from the big.

and laughed as Davis accidentally exposed the

when he folded his cards. Rasmussen showed

and the flop came down

giving both players a pair. The turn was the

hit the river giving him trips. Mascio is out in 11th place and we are redrawing for the final ten players.