Here are the official bagged and tagged chip counts from day 1.

Day 1 Ends with Davis Among the Leaders 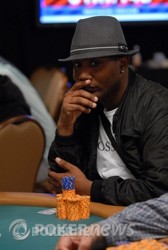 Day 1 of Event 8: $1,500 Omaha Hi-Low Split 8-or-Better is in the books, and Nikolai Yakoveko and Raymond Davis are among the chip leaders.

The day got off to a slow start, but once the late registrants started to pour in, the field and prize pool grew. When the dust settled, the official number of entrants was 967, and after ten levels of play, only 220 remain.

With no 5 p.m. event at the WSOP today, a plethora of notables played, including Andrey Zaichenko, Owais Ahmed, Mike Leah, Allen Kessler, David Benyamine, Eric Baldwin, Phil Ivey and Xuan Liu. All of those players busted however, induing Ivey, who was unable to get anything going. He did flop the nuts in a three-way all in pot however. With the board reading

, Ivey and two opponents capped the action, and the rest of the money went in when the

was a lock to win the high unless the board paired, and it didn’t when the

fell on the river. Unfortunately, Ivey fell as well to the hands of Mike Matusow.

Matusow and tablemate Bertrand “ElkY” Grospellier made it to Day 2. Matusow is somewhat short with around 12,000 chips, but he’s still confident.

“I have five big bets and I feel great,” he said during the tenth level of play.

Davis grinded all day to build his 57,200-chip stack, but during the final level he received an 8,000-chip gift. On a board of

, an opponent capped the action, and when the

fell on the river, he stuck his last bet in. Davis called with

, and his opponent showed

We’re nearly 100 spots from the money, and play will resume tomorrow at 1 p.m. local time. Make sure you return to PokerNews for all of your up-to-the-minute updates.

Without a 5 p.m. tournament to double dip in, Jason Mercier has been forced to grind Event 8 all day. He's been very quiet, and his stack is stuck at 4,000 chips, but he's persistent. There's no quit.

At a neighboring table, friend Allen Bari, who appeared on today's PokerNews Podcast, has also been quiet. Bari is also below average with 15,000 chips.

More From "The Mouth"

Mike Matusow on Bertrand "ElkY" Grospellier: "This guy didn't even know how to play stud, and he won the World Championship! He doesn't win a tournament for six months and he acts like something's wrong!"

The Mouth is warming up, and ElkY can do nothing but smile.

. The two got what looked like five bets in, and the river brought the

. The player bet 1,400, which is less than one bet, and Davis quickly called, fanning

The player showed the

, and then he flashed the rest of his hand before mucking.

The entire table was quite bewildered, and Davis could do nothing but laugh as he pulled in the pot.

Davis showed interest, and Matusow offered him an even-money bet, despite being out-chipped by nearly 30,000.

"How much?" Davis asked.

"He" was Bertrand "ElkY" Grospellier.

"A guy I trust," Matusow returned.

It took Davis a few minutes to realize it was all a level.

"How can you go back on your word like that?" Davis asked.

The two went back and forth for a little longer, but eventually let it go.

Matthew Croker recently emerged as the tournament chip leader. Croker, a member of #TeamGrime, has slightly over 50,000 chips.

We just saw Phil Ivey walk out of the Brasilia Room, meaning only one thing - he's out. When we walked to his table, we saw that Mike Matusow was stacking chips.