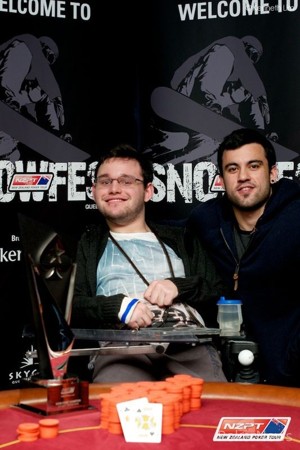 When Jonathan Bredin defeated a field of 126 players to be crowned the ANZPT Queenstown Main Event champion, it wasn’t like any other story we had ever seen. Bredin suffers from cerebral palsy and requires the aid of a special iPad and a carer to help communicate his decisions at the poker table. However, apart from this aesthetic aspect of his game, he has shown over the last five days that he can play poker with some of the best players around the Asia-Pacific.

That’s not where the story ends though. Not only was this Bredin’s first-ever elite poker tournament after only playing small-venue games back in his home town of Melbourne, but the

that Bredin held when he won the final hand of the tournament is tattooed on his shoulder – same suit and all. Most people couldn’t even dream up a story like that.

Following his victory Bredin said that he is going to buy a car that is specially designed for someone in his medical situation. He also plans to play as many events on the ANZPT and the APPT as possible.

When the final day began it was Bredin who held the chip lead, while Colin Carpenter was the short stack. It wouldn’t be Carpenter who would go home first though as Michael Chon would finish in 9th place. From there, prominent Australian Daniel Neilson would finish in 8th, Carpenter would bow out in 7th and Ricky Kroesen would end up in 6th. Kroesen finished 4th in the same event last year and wasn’t able to improve this time.

Up until five-handed play the action had been quite steady, but at this point the players slowed up. When we say slowed up, we really mean it. One hand between Jon Pierre Narbey and Chiu Yeung Lee saw the clock called four times and the action take 17 minutes to complete. It was roughly 90 minutes between eliminations before Narbey was sent packing in 5th. Raj Ramakrishnan followed Narbey out the door in 4th place, while Lee was the next out in 3rd place.

At the beginning of the heads-up battle, Daniel Laidlaw had a slight lead over Bredin, but that lead would change several times before the tournament entered the record books. At one stage it was looking like Laidlaw was going to be the champion when he held

and had Bredin at-risk holding

. However, Bredin would end up spiking a deuce to stay alive and take the lead back off Laidlaw.

From there, the final hand of the ANZPT Queenstown Main Event would play out and an excited rail of poker fans would celebrate with the truly humble Bredin as he was crowned the champion!

A huge congratulations to the champion Jonathan Bredin, the runner-up Daniel Laidlaw and all the other members of the 2013 ANZPT Queenstown final table. As always thanks to the team at PokerStars and here at the SKYCITY Casino.

Goodnight, from New Zealand! The PokerNews Live Reporting Team will be back on deck for the next stop on the APPT in Melbourne this September, which Jonathan Bredin tells us he will be playing! 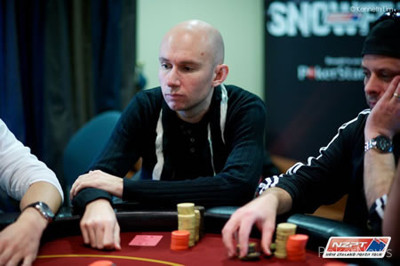 The final hand of the 2013 ANZPT Queenstown Main Event has just played out!

Jonathan Bredin started with the button and raised it up to 80,000. Daniel Laidlaw then moved all in and Bredin quickly called, excitedly getting his helper to table his

. Laidlaw turned over his

and was at risk.

Before the dealer turned over the flop, Bredin was gesturing towards his shoulder, but we will get to that soon.

flop gave Bredin a set of kings, but did mean Laidlaw had a straight draw.

turn didn't change much and the

river meant it was all over in second place for Laidlaw.

Bredin's carer then told everyone that Bredin had the exact same suited kings tatooed on his shoulder.

An amazing story added to an amazing victory from Jonathan Bredin, who despite suffering from cerebral palsy, has overcome all odds to be crowned a very deserving champion of the ANZPT Queenstown Main Event!

Laidlaw All in and At Risk

Daniel Laidlaw was all in holding

flop meant that Laidlaw had dodged all the diamonds and it was a chopped pot.

Jonathan Bredin looked down at

on the button and shoved all in for 690,000. Daniel Laidlaw made a quick call and tabled

Bredin was not looking good and the

hit the turn and he gave a bit of a fist pump.

on the river meant Bredin had managed the huge double.

How the tables turn!

When Jonathan Bredin was all in and at-risk holding

everyone was expecting a chop. Then the board ran out

to the turn and Bredin had a huge sweat for a flush draw.

Laidlaw gave a sigh of relief when a

landed on the river to secure the chop.

Another One for Laidlaw

Daniel Laidlaw was on the button and raised it up to 80,000. Jonathan Bredin called and a

flop was dealt. Both players checked and a

completed the board. Bredin check-called a bet of 100,000 and the two players turned their hands over.

, with the pair of jacks strong enough to send Bredin's

Jonathan Bredin had the button and made the flat-call. Daniel Laidlaw checked out of the big blind. On the

hit the turn. Bredin once again checked and so too did Laidlaw. The

was the river card and both players again checked.

was good for a straight and strong enough to send Laidlaw's cards into the muck.

Daniel Laidlaw limped the button and Jonathan Bredin checked. Both players checked the

turn. The river was a

and Bredin check-called a bet of 80,000. At showdown, Laidlaw showed

for a pair of kings, while Bredin had

for a pair of jacks.

Jonathan Bredin just asked Daniel Laidlaw if he wanted to chop up the prize pool.

"Let's play it out," responded Laidlaw.