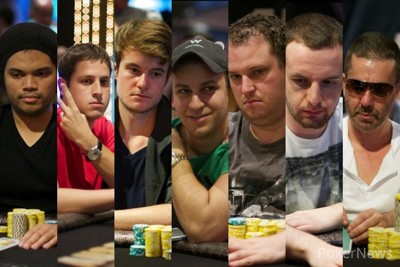 On Friday the final 36 players of a 668-player field returned to Crown Melbourne to play down to the final table of seven in the 2014 Aussie Millions Main Event. It took nearly twelve hours of play, but eventually the final table was set with Ami Barer and his stack of 6.57 million leading the way.

and dominated by Patrick Crivell's

. The jacks held as the board came

, and Boeree hit the rail.

The eliminations continued to mount when Team PokerStars pro Jonathan Duhamel fell in 25th place to Jeff Rossiter, and he was followed out the door by John Juanda in 23rd after JJ's pocket aces failed to hold. From there Craig McCorkell would lose a race against Ami Barer to bust in 21st, and then Barer turned right around and eliminated Team PokerStars Pro Jason Mercier in 18th.

In what would be Fazzino's final hand, Mizzi opened for 48,000 under the gun and received a call from Darren Rabinowitz in the cutoff. Denny Lewis then came along from the button and Fazzino, who had dwindled to a short stack, moved all in for 344,000 from the small blind. Mizzi made the call, the other two players folded, and the cards were turned up.

Mizzi was ahead with the big pocket pair, and that meant Fazzino's best shot at survival was to catch either an ace or spades. Unfortunately for the Perth contingent on the rail, their man was left drawing to running aces when the

flop gave Mizzi a set. The

turn was the final nail in the coffin, and after the

was run out on the river for good measure Fazzino took his leave in 14th place for AU$70,000.

The final seven will have the day off on Saturday and then return on Sunday to play down to a champion. Who will capture the southern hemisphere’s most prestigious title and the AU$1.6 million first-place prize? You’ll have to wait and see. In the meantime, check out this video on how to eat a Tim Tam:

The seat draw has not yet been determined, but here are the official counts.

Stay Tuned for a Full Recap of the Day 4 Action

The players are now bagging and tagging for the night. We'll have the new seat draw and chip counts for you shortly as well as a full recap of the day's action. Stay tuned. 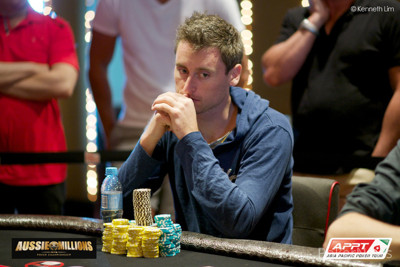 Ami Barer opened from the cutoff for 80,000 and was met by an all-in three-bet to 965,000 from Eoghan O'Dea on the button. Jake Balsiger, who barely had him covered, was in the small blind and thought long and hard before moving all in over the top. Barer folded and it was off to the races.

Balsiger was ahead, but he knew he had to dodge big cards. He didn't seem too thrilled when the

flop delivered O'Dea a gutshot Broadway draw, but there was no need to worry as the

O'Dea missed and was sent to the rail in eighth place, which means the 2014 Aussie Millions Main Event final table is set. 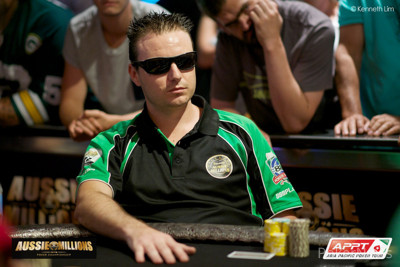 Sorel Mizzi opened from the cutoff and Denny Lewis, who has a deep rail supporting him, opted to move all in for 645,000 from the cutoff. The button and blinds folded, and Mizzi dropped in a call.

"Come on, Denny," one of his supporters yelled from the rail. Lewis was in dire straits as he shared a king with Mizzi but with the inferior kicker. Lewis was in desperate need of a queen, and he sat stoically to watch his fate...

There was no queen to be hand, which meant it was the end of the line for Lewis, who took home AU$130,000 for his ninth-place finish. Not too bad for getting into the Aussie Millions through his local pub league!

Scott Seiver check-called a bet of 70,000 from Ami Barer on a flop of

completed the board, Seiver checked a third and final time, and Barer bet another 215,000. Seiver didn't call the third bullet, and Barer raked in another pot.

Scott Seiver checked to Ami Barer on a board of

completed the board, Seiver checked again, and Barer bet a tiny 170,000. Seiver opted not to call, and Barer now has over six million chips. 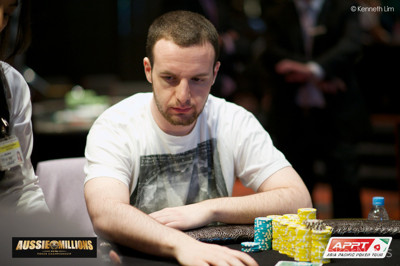 Jake Balsiger checked to Ami Barer on a flop of

The 2012 Octo-Niner opted not to call, and Barer raked in yet another pot.