Ami Barer opened to 160,000 in the hijack, Sorel Mizzi called on the button, and both blinds folded. The flop fell

, Barer led out for 170,000, Mizzi called, and both players checked after the turn brought the

The action went check-check after the

completed the board, and Mizzi took down the pot with

Barer Loses Another One

Ami Barer opened for 160,000 and Jake Balsiger made the call from the big blind. The 2012 World Series of Poker third-place finish proceeded to check-call a bet of what appeared to be 180,000, and then both players checked the

peeled off on the river, Balsiger led out for 280,000 and Barer snap-folded.

Barer Wins One, Barer Loses One

Darren Rabinowitz opened to 160,000 in the cutoff, Ami Barer called in the small blind, and Andrew Phaedonos tank-folded in the big blind.

and Barer quickly checked. Rabinowitz checked behind, the turn was the prettiest card in the deck - the

Ami Barer raised to 160,000 on the button, Sorel Mizzi defended his big blind, and the flop fell

The turn was another deuce - the

, and the pair knuckled. The river was the

, both players knuckled, and Barer was forced to show

. It was no good against Mizzi’s

for a pair of aces, and he picked up the pot. 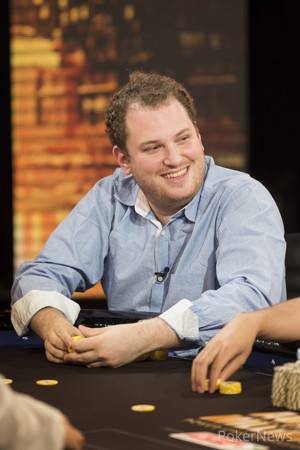 It's taken nearly three hours of play, but we've finally had our first elimination.

It happened when Darren Rabinowitz opened for 160,000 and was met by an all-in three-bet of just over a million by Scott Seiver from the button. Both blinds folded, Rabinowitz called, and it was off to the race.

According to the PokerNews Odds Calculator, Rabinowitz was a slight 55.24% favorite while Rabinowitz would win 44.40% of the time. Unfortunately for Seiver, this was one of those time as the flop came down

to pair Rabinowitz's ace and make him an 86.36% favorite.

turn was a good card for Seiver as it gave him a 25% chance of hitting his flush, but it was not meant to be as the

blanked on the river. Seiver was eliminated in seventh place for AU$170,000.

Posted 2 hours 29 minutes ago by

All final table photos are courtesy of Shannon Morris, the official photographer for Crown Casino.

Marvin Rettenmaier and Sam Cohen on the rail

Let's Have Ourselves a Dinner Break

Players are now on a 45-minute dinner break. 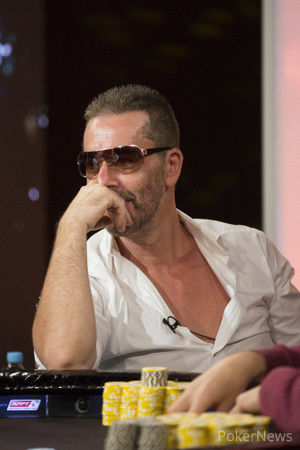 Vincent Rubianes opened with a raise only to have a short-stacked Andrew Phaedonos three-bet all in from the big blind. Rubianes made the call and the cards were turned up.

Phaedonos was ahead, and he took a hammerlock on the hand when the

flop delivered him an ace. The

turn left Rubianes drawing dead, and after the

was run out on the river, Phaedonos was pushed the pot.

We'll have updated counts for you shortly.