Defending Champ Falls and Dean Schneider Thrives on Day 1b 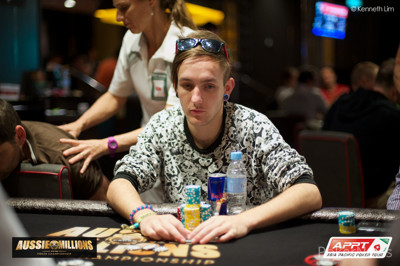 The 2014 Aussie Millions Main Event continued on Monday as 153 players entered the second of three starting flights. hat number was down slightly from Day 1a’s 176 runners, but that wasn’t exactly a surprise considering it overlapped with the Super Bowl.

Still, it was a full day of action as dozens of players hit the rail over the course of seven 90-minute levels. By the time the clock expired for the night, 81 players remained with Dean Schneider and his stack of 188,800 leading the way.

We caught up with Schneider late on Day 1b to find out how he acquired his stack:

It was a busy day of action in Crown’s Poker Room on Monday as 30 players returned in the $25,000 Challenge to play down to a winner and a sea of tables were set up to accommodate the second starting flight of the 2014 Aussie Millions Main Event.

Chan was the only player not to experience elimination last year on his way to a $1.6-million payday, but this year he had to deal with it in Level 6 (250/500/75) in brutal fashion. The betting details remain a mystery, but we do know that Chan was sent to the rail by Sotirios Kappas.

, and he was likely confident with his

flopped Broadway straight. Unfortunately for him Kappas, who won a big pot earlier in the day by hitting running cards, managed to make a runner-runner full house with the

. A shell-shocked Chan watched his chips pushed across the table and then took his leave from the 2014 Aussie Millions Main Event ensuring that a new champion will be crowned.

Day 1c is set to kick off at 12:30 local time on Tuesday, and it’s expected to be the biggest and best starting flight yet. Among those expected to take their shot are Daniel Negreanu, Angel Guillen, Jason Mercier, Dan Smith, Philipp Gruissem, Scott Seiver and Dan Shak. Join us then as we bring you all the latest and greatest from Melbourne.

In the meantime, check out this video on how to stay healthy while on the road:

Each table will play five more hands before the players bag and tag for the evening.

It all started with a limp from under the gun. Jackson Zheng raised to 1,600 from UTG+1, Tolly Sakellariou three-bet to 3,200, and Erik Seidel cold four-bet to 8,500. The action folded all the way back to Sakellariou, who folded as well, and the eight-time World Series of Poker bracelet winner shipped the pot.

As we near the end of the day, things are getting a bit strange in the Aussie Millions Main Event.

"I'm losing it," Antonio Esfandiari recently told one of our reporters.

On Table 29, the players are having a competition to see who can raise the largest preflop. In one hand, Tim Slater limped in and Daniel Neilson raised to 2,800 (4.67 big blinds). Slater made the call, then check-folded to a bet of 3,600 on a flop of

Rubie Gives Up on the Turn

Brendon Rubie raised to 1,300 out of the small blind, Aaron Lim defended his big blind, and the flop came

Rubie slowed down, knuckling the felt, and Lim reached into his stack. He tossed out six red T500 chips, making it 3,000 to go, and Rubie tossed his cards into the muck.

Brendon Rubie is playing Day 1b of the 2014 Aussie Millions Main Event and speaks to Kristy on a break. He even admits that he is scared to face her on the soccer field.

Just a half an hour away from bagging and tagging for the evening, Michael Guzzardi was eliminated by Sotirios Kappas with unknown action.

When we reached the table, Jai Gao, Paul Klann, and Dean Schneider were three-handed on a flop of

completed the board, Schneider led out for another 6,200, and Klann called once again. Schneider showed

for a lowly pair of deuces, which was no good against Klann's

for a top pair of aces.