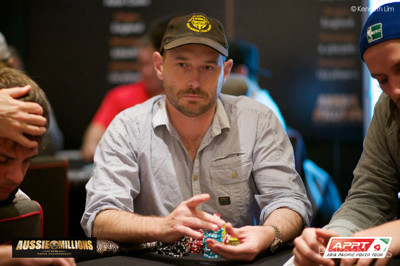 The 2014 Aussie Millions Main Event continued on Tuesday with the third and final starting flight, and leading the day’s survivors is Martin Rowe.

Rowe bagged 228,100 chips and is the overall leader entering Day 2 after winning a massive pot on one of the last hands of the evening. The Aussie moved all in with

, and an opponent ripped it off with

for the nuts. The

spiked on the river, giving Rowe a boat and pushing his stack over 200,000 chips.

Team PokerStars Pro Jason Mercier is also among the leaders after Day 1c. Mercier flopped a set of threes then turned treys full against an opponent with pocket queens, and made a straight flush against Marvin Rettenmaier the very next hand. Thanks to the late rush, the American, who has never cashed in the Aussie Millions Main Event, bagged 132,200 chips.

A total of 328 players registered on Day 1c, bringing the field size to 657 – three tables more than the 2013 Aussie Millions Main Event. Registration is open until the start of Day 2, so if anyone is willing to gamble they can join the fun.

With the $25,000 Challenge running during the first two flights, dozens of notables waited until Tuesday to join the Main Event. Among the big names to register were $25,000 Challenge winner Max Altergott, Phil Ivey, Daniel Negreanu, Dan Shak, and Tobias Reinkemeier. Unfortunately all of those players were unable to survive the day.

An opponent with ace-high floated Altergott on the flop and the turn, and when the German moved all in with two pair on the river, his opponent snap-called with a Broadway straight. Ivey flopped an ace-high flush draw against Nistas, who held top-pair top-kicker, and the turn and river both produced bricks. Negreanu flopped a set of deuces against an opponent’s pocket aces, and the player rivered an ace. And Shak ran pocket aces into Jarod Ludemann’s pocket nines.

Dan Smith was one of the five players to chop the $25,000 Challenge on Monday, but he bucked the trend, reaching Day 2 with 69,300 chips. Smith fell to 9,000 chips in Level 5 (250/500/75), but quickly mounted a comeback. Smith won a decent-sized pot off of 2010 Aussie Millions Main Event champ Tyron Krost in Level 6, firing out an over-bet on the river, and climbed back to 100 big blinds a few hands later. Krost was later eliminated.

Day 2 will begin on Wednesday at 2:30 p.m. local time. The plan is to play six 90-minute levels with a 75-minute dinner break after Level 2. Be sure to check back to PokerNews for live updates straight from the tournament floor.

The players are bagging and tagging for the evening. We will be providing a few end-of-day counts and a recap shortly.

Tyron Krost won't be repeating his feats of 2010 as he was sent to the rails on one of the final hands of play today.

Dan Smith called a 3,000 bet from Krost on a board reading

dropped on the river and Smith checked to Krost, who moved the last of his stack into the middle.

as he grabbed his bag on his way to the rail.

Martin Rowe had been quietly collecting chips all day and he put them to great effect in our biggest pot of the day thus far.

After five players saw a flop of

, Rowe re-raised an opponent and picked up just the one caller to slim the field.

, and Rowe moved all-in only to be snap-called by an opponent holding

, needing a repeat on the river, and the dealer was able to assist burning and turning the

There was an open to 1,700 in middle position, a player in the cutoff called, and Michael Tran moved all in for 15,300 on the button. Jason Grey re-shoved for 60,000 in the big blind, and the two other players folded.

The queens held up as the flop, turn, and river came

, and Tran hit the rail.

After being crippled in that big hand against Patrick Healy, Martin Finger was left on the short stack. He waited a bit before committing it to the pot from early position, and action folded to Mike Watson in the big blind. Watson, who was also fairly short, looked down at his cards, waited about 20 seconds, and then called.

Finger was in dire straits as his kicker was second best. The German was hoping for some help, but he was left wanting as the board ran out 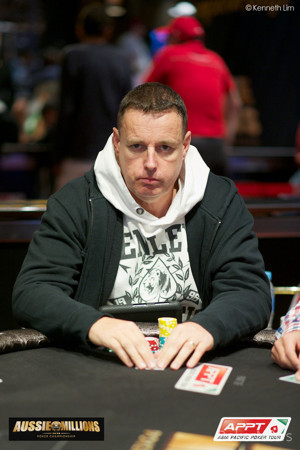 We just saw fireworks on a

flop between Max Greenwood, Martin Finger, and Perth's Patrick Healy. There was around 40,000 already in the pot when Greenwood slide out a huge bet, which was enough to cover both his opponents. Much to the surprise of the rest of the table, Finger called off for 43,200 and then Healy did the same for 39,800.

The pot had swelled preflop thanks to the big pocket pairs of Greenwood and Finger, but it was Healy who got lucky to flop a flush and get the chips in. Both his opponents were drawing dead on the

turn, and after the

was put out on the river, an excited Healy was pushed the massive main pot. Finger won the 6,800 side pot.

, Australian Poker Hall of Famer Jason Gray checked from the big blind and an under-the-gun player did the same. Patrik Antonius followed their lead and the

appeared on the turn. Gray checked, the under-the-gun player bet 3,500, and only Antonius called.

peeled off on the river, the under-the-gun player tossed out a big bet of 17,000 and Antonius immediately grabbed some chips as if he was going to call. However, he hesitated, smiled, and then began to eat his salad. After a brief spell in the tank, Antonius laid down his hand.