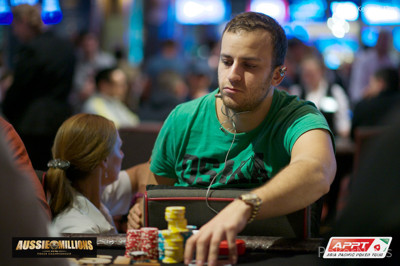 The 2014 Aussie Millions Main Event continued on Wednesday as the surviving players from the three starting flights combined into a single field in Crown’s Poker Room. The day began with 355 players, but after six 90-minute levels of play just 109 remained with Phillip Willcocks (510,600), Sorel Mizzi (507,100), and Gareth Dwyer (503,600) topping the counts.

We caught up with Duhamel late on Day 2 to see how he was doing. He also offered his thoughts on Joe Hachem’s belief that recent World Series of Poker Main Event champs haven’t lived up to their responsibilities.

Nine players took advantage of the late registration, which brought the total number of entries up to 668 – the biggest turnout in the last three years! That created a prize pool of AUD$6.68 million, which will be distributed to the top 72 players with the eventual winner receiving a smooth AUD$1.6 million.

One player to late register was Gus Hansen, who won the Aussie Millions back in 2007. Hansen got off to a quick start by doubling his stack, but he was eliminated shortly thereafter. Likewise, 2004 Aussie Millions champ Tony Bloom fell early on Day 2.

It was a classic race, and according to the PokerNews Odds Calculator Smith was a slight 56.65% favorite while Grigg would score the elimination 42.95% of the time. The

flop was safe for Smith, and he pulled out to a 3-1 lead. Unfortunately for him, that is when the dealer burned and turned the

. Grigg paired his ace to become a massive 95.45% favorite, which meant Smith needed to catch a jack and a jack only to survive. He had a 4.55% chance of doing it, but in this particular hand it didn't come as the

Day 3 is set to begin at 12:15 local time, and the plan is to play six more 90-minute levels. During that time the money bubble will burst and the field will be reduced to approximately 30 players. Of course the PokerNews Live Reporting Team will be on hand to bring you all the action, so be sure to check back then.

In the meantime, have a look at Kristy Arnett’s interview with Patrik Antonius, who was one of many Day 2 casualties:

One Last Pot for Juanda

John Juanda has been accumulating chips all day and playing a few pots. Meanwhile, patiently to his left remained a local player nursing a 30,000 stack for most the day.

Finally, with one hand of play left, Juanda opened the cut-off only to have his opponent move all-in for an additional 39,400 chips.

Juanda pondered his decision before finally making the call.

dropped on the turn there was a bit of a sweat as it looked very much like a deuce. However, there was no mistaking the

on the river which sent the poor local home ensuring he wouldn't see Day 3 of this tournament.

Phillip Willcocks just won a big hand to move over 500,000 in chips. It was the straight for Willcocks that defeated the set of his opponent to vault him over half a million in chips.

The remaining player, of which there are approximately 120, will play four more hands before bagging and tagging for the night. We're headed out to gather some chip counts and capture any last-minute action. Stay tuned for those and a full recap of the Day 2 action.

Antonio Tartaglia was all in for 29,700 with the

. Gareth Dwyer made the call with the

. The flop, turn, and river ran out

, and Dwyer made a flush to win the hand and bust Tartaglia.

and paired the board. Both players checked to see the

, and Dwyer responded with, "I had you all the way," before mucking his hand.

"My first mistake of the day," Dwyer continued. "I should have known that jack helped you!"