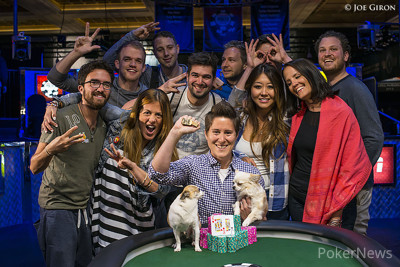 After overcoming a near seven-to-one chip deficit in the semifinals of Event #2: $25,000 Mixed-Max No-Limit Hold’em, Vanessa Selbst overcame yet another big chip disadvantage in the final heads-up match to defeat Jason Mo and capture her third World Series of Poker gold bracelet.

The match swung on Hand #63 when Selbst won a massive pot and took the chip lead. The turn was the case queen, giving Mo top pair and Selbst a set of queens, and Selbst called a big bet on the river. Mo doubled shortly thereafter, but was unable to chip up enough to even up the match.

Selbst says she benefited from the 20-minute break after the first 52 hands of heads-up play. She was able to watch the live stream for a little bit and prepare to comeback as a five-to-one underdog.

Only one woman, Barbara Enright, has as many bracelets as Selbst. The Team PokerStars Pro also has over $10 million in career live tournament earnings thanks to the $871,147 top prize.

This unique event kicked off on Tuesday with 131 players playing nine-handed poker, and only 60 remained after Day 1 action. On Day 2 all of the tables were six-handed, and they played until the money bubble burst at 16. Phil Ivey and John Juanda exited empty-handed, finishing 18th and 17th respectively.

Al Decarolis led the remaining 16 players on the penultimate day, and retained the chip lead entering the heads-up semifinals. Unfortunately for him he was unable to get past Selbst, who as mentioned overcame a near seven-to-one chip disadvantage to advance. In the other semifinal, Mo took on 2013 November Niner JC Tran. The two started their match close in chips, but Mo won a big race and was able to seal the deal.

Mo carried the chip lead into the final match, and started to whittle Selbst down. The Team PokerStars Pro was down to as little as 1.68 million, but came roaring back to claim the title. To her delight, not only was Selbst’s wife on the rail, but her puppies were allowed in the Thunderdome as well.

Congratulations to Selbst, who will now be a clear contender in the 2014 WSOP Player of the Year race, and made an instant impact in the $25K Fantasy league as well.

Be sure to continue sweating our coverage of the entire 2014 World Series of Poker right here on PokerNews, but for now, good night from the Rio!

Vanessa Selbst made a big comeback to take out Jason Mo in a heads up match to conclude the $25K Mixed Max at the 2014 WSOP. This is Selbst's third gold bracelet.

And some hugs from the Maria's 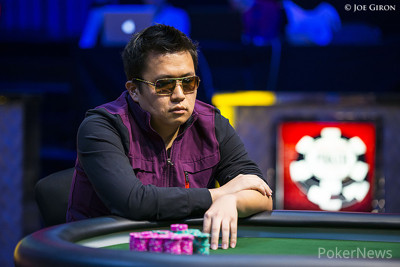 Jason Mo moved all in for 2.535 million on the button, and Vanessa Selbst called.

Mo received no help as the board rolled out

, and Selbst locked up her third WSOP gold bracelet.

Hand #69: Selbst limped in on the button, Mo checked, and the flop fell 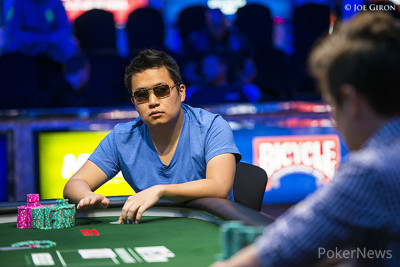 Mo took the lead on a flop of

, and faded Selbst's outs as the turn and river both brought jacks — the 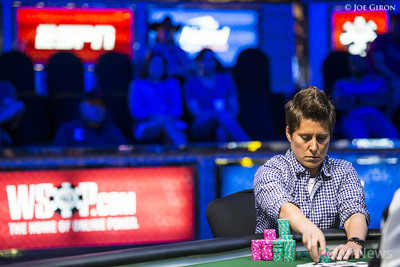 , Mo checked, and Selbst slid out 580,000. Mo instantly turned his attention to his own stack, reached for chips, and called.

, Mo quickly knuckled again, and Selbst checked behind. The river was the

for a set of queens, and is now at a nearly a three-to-one chip advantage. 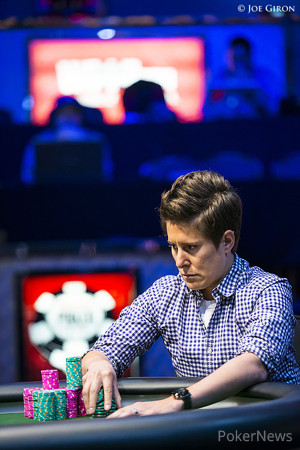 Hand #59: Selbst limped in on the button, Mo checked, and the flop was 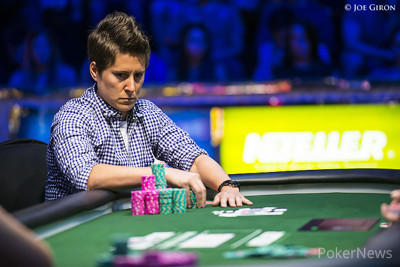 Hand #53: Vanessa Selbst moved all in, and Jason Mo folded.

Hand #54: Mo limped in on the button, Selbst checked, and the flop fell

Hand #55: Selbst limped in on the button, Mo checked, and the dealer fanned

. Both players knuckled, the turn was the

, and the pair checked again. The river was the

Hand #57: Selbst limped in on the button, Mo moved all in for effectively 1.875 million, and Selbst tank-called.

, giving Selbst top two pair and Mo a diamond flush draw. The turn was red, but the

was a brick, as was the

on the river and Selbst doubled through.