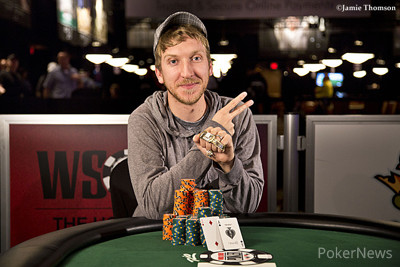 Brett Shaffer just won his second World Series of Poker bracelet in Event #31: $1,500 No-Limit Hold'em, and he defeated RJ Sullivan heads up to claim the first-place prize of $418,435. Shaffer won his first bracelet in a $1,500 no-limit holdem event at last year’s WSOP.

On the last hand of tonight's final table, Sullivan raised to 180,000 from the button and Shaffer pushed all in. Sullivan made the call, putting himself at risk.

Sullivan got it in with a bit of an advantage, but his lead melted on the flop of

. His rail started calling for a three, but he didn't find any help on the

river. Shaffer won the hand with trip deuces and Sullivan was eliminated from the tournament in second place.

Day 3 began with 15 hopefuls vying for WSOP gold. It took less than two levels of play to reach the final table, and Steven McNally became the final table bubble boy after just a few hands of 10-handed play.

Sullivan raised it up to 50,000 from middle position and McNally took a minute before pushing his stack all in from the big blind. Sullivan made the call with the bigger stack and McNally's tournament was at risk, though he was way ahead preflop.

McNally was safe and looking to double on the flop of

as well as the turn of the

, and his rail was excitedly anticipating his big double. But then, Sullivan spiked the

on the river and McNally's supporters erupted with a loud, "Ooohhh!" McNally was eliminated in 10th place and earned $23,317 for his run.

The final table was headlined by seasoned pro Matt Stout, who took the chip lead into the final day of play. Stout busted in third place when his four-bet shove was called by Sullivan.

Stout opened to 135,000 and Sullivan raised to 290,000. Stout moved all in and Sullivan called, putting Stout’s tournament life on the line.

Stout was favored before the flop and was looking to score the double up, but then the dealer fanned out a board of

; Sullivan paired his queen and it stood strong. Stout earned $170,247 for his effort.

Thank you for following along with PokerNews and stay tuned for all the action of the 45th annual World Series of Poker. Congratulations once again to Brett Shaffer, the WSOP’s latest bracelet winner. 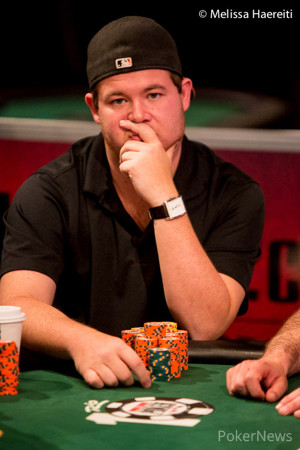 and Shaffer led out for 175,000. Sullivan let go of his hand and Shaffer won the pot.

for a flop and Sullivan checked. Shaffer checked as well and the turn came down as

. Sullivan checked and Shaffer announced a bet of 800,000. Sullivan made the call. Shaffer showed

for a straight and Sullivan mucked his hand.

Hand #147: Sullivan raised to 180,000 from the button and Shaffer pushed all in. Sullivan made the call.

Sullivan got it in with a bit of an advantage, but his lead melted on the flop of

. His rail started calling for a three, but he didn't find any help on the turn or river of

. Shaffer won the hand with trip twos and Sullivan was eliminated from the tournament in second place. He will collect $258,695 for his runner-up finish.

We are going on a 20-minute break.

With just one hand of heads-up play finished, the time has run out on the clock in Level 28.

As we enter heads-up play, here are the chip stacks: