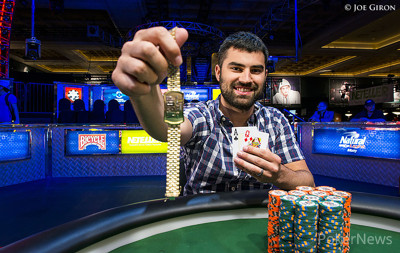 Congratulations to Kyle Cartwright who has defeated 2,223 other players over three days to capture the first place prize of $360,435 and his first WSOP Gold Bracelet.

Twelve players returned to start Day 3 and the first two would fall in the first half hour of play.

First to go was Blake Barousse when his

was bested by the

of Robert Kuhn. All the chips went in preflop and the

board sent him packing. Very soon after that a short stacked Geoffrey Mooney shoved from the small blind with

but walked into the

of Kyle Cartwright in the big blind and Mooney was out in 11th.

That meant we had the unofficial final table of 10 and as soon as the dogs and Frisbees show was finished they moved over to the feature table to re-join battle. On the very first hand Steve Chanthabouasy agonized over a river shove from Cartwright on a board of

and when he made the call with

. Ken Weinstein exited in 10th when his short stack shove with

was looked up by the

on the turn of a board reading

. Unfortunately for him, Kyle Cartwright (again!) was his opponent had a legitimate

top two pair hand and the river was the inconsequential

Jeremy Dresch was next to go and it was Cartwright, who was making a habit of knocking players out, who would be his executioner. Cartwright six-bet shoved with

and Dresch called it off with

. No help for Dresch on a board of

. Ylon Schwartz looked him up with

and flopped him practically dead on a final board of

The story of quite a long session of three handed play was Paster’s refusal to give up and a series of double ups where he got it in with the worst hand but came up smelling of roses each time. On level four, when they were four handed, he got it in with

and was at risk against the

of Dizenzo but a straight on the

board saved him. He then doubled up minutes later with

of Cartwright when the board ran out

. He then slipped back a fair bit before getting it all in with

against Cartwright again, and again the dealer came to the rescue, this time on the river as the cards fell

. It looked for a long time that it would come down to a battle between Cartwright and Schwartz, but it was not to be.

It finally got to heads up play when Paster raised to 100,000, Cartwright three-bet to 260,000 and Schwartz shoved from the big blind for 2,025,000. Paster folded and Cartwright gave it a great deal of thought before making the call. His call turned out to be inspired as his

was in great shape against the

of Schwartz. The board ran out

A quick dinner break was then declared and they came back to play with Cartwright holding the lead with 4,605,000 against the 2,025,000 of Paster. Indeed it didn’t take long after resumption of play for a winner to be decided.

Both players stood up and had their eyes glued to the felt as the dealer put out the cards that would decide if the matter was settled there and then.

Cartwright threw his arms in the air in jubilation and rushed over to his supporters before shaking hands and receiving the congratulations of his opponent.

Kyle Cartwright captures his first gold bracelet in event 4 of the 2014 World Series of Poker. 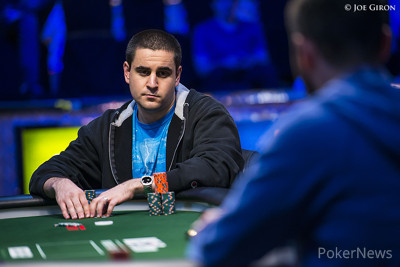 Paster was at risk and turned over the

. The players stood and awaited the flop which fell

and Cartwright vaulted into the lead.

Cartwright’s rail yelled and now he had to anxiously fade a four or two runners. The turn was the

and the river must have seemed to take forever for Cartwright and Paster, but eventually came the

Paster is out in second place and Cartwright wins the title and the bracelet.

, Paster checked and Cartwright checked behind. The turn was the

. Cartwright checked and Paster bet 75,000 and got a call. The turn was the

. Check from Cartwright and a check from Paster. The

fell on the river and they both checked and played the board. Chop it up.

. Paster checked and Cartwright bet 65,000 which got a call. The turn was the

. They both checked to see a river

The First Few Hands of Heads Up Play

Jason Paster raised to 100,000 from the button and Cartwright folded.

Kyle Cartwright raised to 100,000 and Paster called. The flop was

and both Paster and Cartwright checked. The river was the

Paster raised to 100,000 and Cartwright called. They saw a flop of

Cartwright raised to 100,000 and Paster folded.

Short dinner break over, heads up play will now begin as hand for hand coverage continues until we have a winner.

Players Are On a Dinner Break

The final two players are on a forty minute break and will return at approximately 8:45pm. 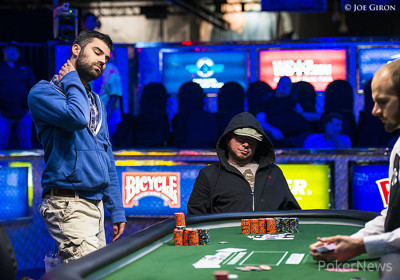 . We could see the disappointment on Schwartz’s face as he rolled over

Schwartz was the player at risk and needed help in a big way. The flop came down

on the turn was no help for him either. The

completed the board and Schwartz was gone in third place.

Paster and Cartwright will now play heads up for the bracelet.