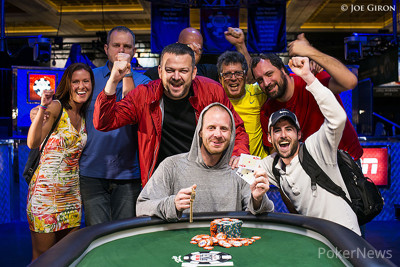 After three days where players seemed to be learning and evolving their strategy at the tournament it was Jesse McEuen who emerged victorious, topping a field of 714 players. It was his first ever final table and he seized the day as well as the bracelet.

Arthur Pro lasted just seven hands after the resumption of play today, getting it in good with

versus Rhys Jones, who had shoved with

. Pro hit his ace on the turn, but the river brought Jones a queen-high-straight to send Pro out in ninth and $16,145 to take home.

The remaining five players would swap chips as they tried to out maneuver each other in the battle for the antes in the middle at the start of each hand. There were a number of double ups, making it anyone’s tournament.

Adam Levy was eventually the player eliminated in fifth place for $46,575. Levy got it all in with

on the flop of

of Rhys Jones. The turn

Again, it was Jones who dealt the fatal blow to the next player to be eliminated: Simeon Naydenov. Jones got it all in preflop with

and Naydenov called it off with

That put Jones in the lead, but a succession of bad river cards for him saw his active approach to the three-handed game fail to pay off, and he was the next player out when he three-bet-shoved his short-stack, holding

and got looked up by Jesse McEuen with

meant Jones would have to settle for third place and $85,131.

Heads-up play between Jonas Lauck and Jesse McEuen started with pretty even stacks, but McEuen began to pull ahead by the time of the next break. When they returned, it was all over in one hand as they got it all in preflop.

Lauck had a good hand with

but McEuen had the better one: 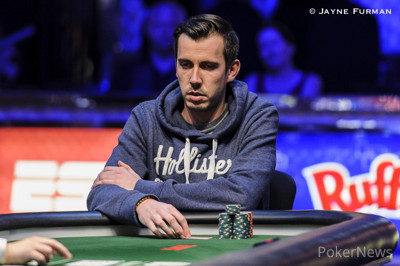 Lauck moved all in and McEuen made the call.

but had been coolered by the

and it was all over.

McEuen immediately went over to shake the hand of the vanquished Lauck before the celebrations began.

Hand #161: Jonas Lauck brought it in and Jesse McEuen called. The flop came

. McEuen checked and Lauck bet 40,000. McEuen called and the turn came the

. They both checked and McEuen showed the

Following the hand, the players went on a 17-minute break.

and Lauck went for chips betting 140,000, McEuen raised to 370,000. Lauck stared at the board and wrung his hands before calling and getting shown the

and Lauck checked. McEuen checked and the river was the

. Lauck bet 150,000. McEuen called and they chopped with both playing the board.

Hand #147: Jonas Lauck brought it in and McEuen called. They checked to the turn

. Lauck checked and McEuen checked. The

won it for Lauck.

which was checked. McEuen checked again on the river